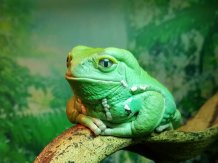 Research on zoo animals focuses more on “familiar” species like gorillas and chimpanzees than less well known ones like the waxy monkey frog, scientists say.

Globally, fish and birds outnumber mammals, reptiles and amphibians in zoos – but the study says mammals are consistently the main focus of research on zoo-housed animals.

This “mammal bias” also exists in wider research, including in the wild, but lead author Dr Paul Rose, of the University of Exeter, says zoos offer wonderful opportunities to study other species.

The study looked at the last decade of research on zoo-housed animals, both by zoo staff and visiting scientists, and noted the growth and value of such studies.

“Some species, such as chimpanzees, are popular with scientists because we know a lot about them, they are accessible and humans can relate to them,” Dr Rose said.

“As well as being found in zoos, many of these species are relatively easy to find and study in the wild.

“By contrast, it would be hard to find a waxy monkey frog in the rainforest to conduct your research.

“Zoos offer us a fantastic opportunity to study a vast range of species, many of which would be very difficult to observe in their natural habitat.

“Our findings can teach us about conversation, animal health and how best to house them in zoos.

“Despite the mammal bias, the output from zoo research has diversified and zoo animals are being used to answer a whole range of important scientific questions relevant to our lives and their lives.”

“Lots of mammal studies are about animal welfare, which is great, but we should also research the welfare of fish, birds and anything else we keep in zoos,” Dr Rose said.

“At the moment, we are publishing on the same few species, rather than broadening our scope.

“Obviously we have lots to learn about every species, but opportunities to study many other zoo-housed animals are currently being missed.”

Ten years ago, published research identified the need for studies about a range of species beyond much-loved animals such as elephants and primates.

The new study reviewed zoo-based research in the decade since this recommendation and concluded:

-          Zoo-focussed research output increased from the start to the end of this study.

-          Trends in species held by zoos are not reflected by trends in which species are studied.

-          Zoo-based research makes meaningful contributions to science. For example, it led to ground-breaking insights into the reproductive biology of the critically endangered Sumatran rhino.

-          Researchers should diversify both the species chosen and the aims of studies to address “persisting research gaps”.

The paper, published in the journal Palgrave Communications, is entitled: “What’s new from the zoo? An analysis of ten years of zoo-themed research output.”