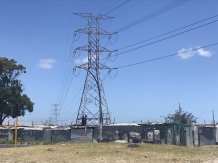 Energy inequalities in Cape Town - high-voltage power lines over an informal settlement, many of which are unelectrified - credit Zonke Energy

A project jointly led by the University of Exeter has been shortlisted for a prestigious prize worth up to £500,000.

Shortlisted for the Chair's Prize is a project entitled: "UMBANE: powering innovative sustainable businesses with productive use appliances in South African informal settlements at the margins of the grid."

Led by Dr Federico Caprotti, a Turing Fellow at the University of Exeter, and Dr Jiska de Groot, of the University of Cape Town, the project addresses the key issue of how to use renewable energy technologies such as solar microgrids to power sustainable businesses in off-grid parts of the city.

"I hope we are awarded the project, as this would be an excellent way to work with female entrepreneurs in informal settlements, developing sustainable businesses around solar power technologies and refrigeration in the off-grid city."

The project's focus is important because municipalities and government ministries find themselves in a bind between constitutional priorities that call for full electrification, and legal, safety and other obstacles that mean that informal settlements remain largely outside the sphere of action of energy policy.

This means that while the post-1994 period has seen almost total electrification in the country's cities, many informal settlements (which have, in the interim, grown) have remained "off-grid".

Energy use in these settlements remains confined to hazardous and health-limiting forms such as paraffin, wood and plastic (burned indoors) and unsafe and unstable illegal connections to the grid, often achieved through unsheathed or poorly sheathed cabling running on the ground and posing threats to settlement residents, especially children (and especially in wet weather when cables become mired in mud).

UMBANE (which in Xhosa means "electricity") was shortlisted based on previous Newton-funded work led by Caprotti and de Groot. The project team has previously worked with municipal authorities in Johannesburg and Polokwane, and with a range of NGOs and community organisations, on a project titled "Urban transformations in South Africa through co-designing energy services provision pathways."

Funding for that project came from the Economic and Social Research Council, part of UK Research and Innovation, and the National Research Foundation, South Africa.

The Chair’s Prize will be made to a project that can demonstrate impact in one of three specific United Nations' Sustainable Development Goals: Good Health & Wellbeing, Gender Equality, or Sustainable Cities & Communities.

The shortlisted projects have been peer reviewed and will be judged by a panel of independent experts.

Professor Dame Jane Francis, Director of the British Antarctic Survey and a Newton Prize Committee member, said: “The Newton Prize generates some amazingly innovative ideas from many nations in partnership with the UK.

“It's inspiring to read proposals that cover a wide range of important topics, ranging from how renewable energy will improve village life, how children's health can be improved, how coastal communities can be protected, how waste can be turned into power, and how we can learn from past human rights violations.

"Serving on this committee is an extremely rewarding experience.”

In November 2020 the shortlisted projects will be celebrated at a virtual awards event and the winning projects for each category will be announced.