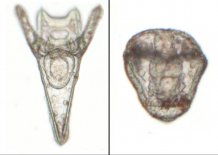 Developing sea urchin larvae are affected by chemicals from marine microplastics. The left urchin larva was healthy and the other had been exposed to chemicals that had leached from plastic into the water. Credit Eva Jimenez-Guri

Plastics in the ocean can release chemicals that cause deformities in sea urchin larvae, new research shows.

Scientists soaked various plastic samples in seawater then removed the plastic and raised sea urchin embryos in the water.

The study, led by the University of Exeter, found that urchins developed a variety of abnormalities, including deformed skeletons and nervous systems.

These abnormalities were caused by chemicals embedded in the plastics leaching out into the water, rather than the plastics themselves.

The plastic-to-water ratio in the study would only be seen in severely polluted places, but the findings raise questions about the wider impact of plastic contaminants on marine life.

"We are learning more and more about how ingesting plastic affects marine animals," said Flora Rendell-Bhatti, of the Centre for Ecology and Conservation on Exeter's Penryn Campus in Cornwall.

"However, little is known about the effects of exposure to chemicals that leach into the water from plastic particles.

"This study provides evidence that contamination of the marine environment with plastic could have direct implications for the development of larvae, with potential impacts on wider ecosystems.

"Our work contributes to the growing evidence that we all need to help reduce the amount of plastic contamination released into our natural environment, to ensure healthy and productive ecosystems for future generations."

Dr Eva Jimenez-Guri, also of the Centre for Ecology and Conservation, added: "Many plastics are treated with chemicals for a variety of purposes, such as making them mouldable or flame retardant.

"If such plastics find their way to the oceans, these chemicals can leach out into the water.

"Plastics can also pick up and transport chemicals and other environmental contaminants, potentially spreading them through the oceans."

The study used pre-production "nurdles" (pellets from which most plastics are made) from a UK supplier, and also tested nurdles and "floating filters" (used in water treatment) found on beaches in Cornwall, UK.

For the tests, each plastic type was soaked in seawater for 72 hours, then the plastic was removed.

Analysis of the water showed all samples contained chemicals known to be detrimental to development of animals, including polycyclic aromatic hydrocarbons and polychlorinated biphenyls.

Water from the different kinds of plastic affected urchin development in slightly different ways, though all sample types led to deformity of skeletons and nervous systems, and caused problems with gastrulation (when embryos begin to take shape).

The study also raised urchin embryos in water that had contained "virgin" polyethylene particles that had not been treated with additive chemicals or collected any environmental pollutants.

These urchins developed normally, suggesting that abnormalities observed in other samples were caused by industrial additives and/or environmentally adsorbed contaminants – rather than the base plastics themselves.

Nurdles and floating filters are not waste products, so they are not deliberately discarded, but the study highlights the importance of preventing their accidental release.

The researchers say most plastics may have similar effects as those in the study, so the findings emphasise the importance of finding alternatives to replace harmful additives, and reducing overall marine plastic pollution.

The study team included the Stazione Zoologica Anton Dohrn (Naples, Italy) and the Institute of Oceanology at the Polish Academy of Sciences (Sopot, Poland).

It was funded by the European Union's Horizon 2020 programme and the Natural Environment Research Council.

The paper, published in the journal Environmental Pollution, is entitled: "Developmental toxicity of plastic leachates on the sea urchin Paracentrotus lividus."