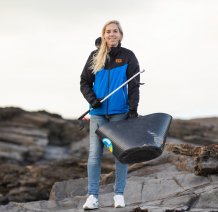 A University of Exeter postgraduate student has been honoured with The Diana Award - the highest accolade a young person can achieve for social action or humanitarian efforts.

Emily Stevenson, who is studying a Masters in conservation science and policy at the University of Exeter’s Penryn Campus, has received The Diana Award for the social action she has been doing to tackle plastic waste.

Preserving the natural environment has been a life-long goal for Emily, aged 23. Being lucky enough to grow up on the beach in Cornwall, Emily developed a connection to nature at an early age, and always felt a desire to protect what she loves.

For over half her life she has been picking up plastics from beaches and now motivates, inspires and supports others to take care of their marine environment through the Non-Governmental Organisation she co-founded - Beach Guardian.

In her social media video series ‘Tune In Tuesday’, which has now reached over 2 million people worldwide, Emily provides an interactive and educational insight into a vast array of issues facing both wildlife and people, whilst emphasising the power that an individual has to instigate and facilitate positive change.

Emily said: "I am so grateful for this unbelievable recognition and cannot thank everyone enough that has supported and believed in me.

“As a conservationist, it’s sometimes hard to know whether you are making a difference or your message is being heard. This award is just phenomenal as it shows me that I am being heard and really empowers me to keep going.

“I'm also incredibly grateful for those that have given me such invaluable support and inspiration at the University, like my project supervisors Dr Aimee Murray and Professor Angus Buckling. It’s because of them that I have had the opportunity to grow academically and discover new passions for research.

“With their guidance and mentorship, I have been able to undertake my dream research project, which is investigating microplastic associated biofilms and the subsequent role in pathogenesis and dissemination of antibiotic resistance."

Established in memory of Diana, Princess of Wales, The Diana Award is given out by the charity of the same name and has the support of both her sons, The Duke of Cambridge and The Duke of Sussex. The award is given to people for going above and beyond in their daily life to create and sustain positive change.

Emily has now delivered over 60 presentations to community groups, engaging with over 5,000 people. Ranging from Rainbows and Brownies, Beavers and Cubs to WI, Soroptomists, the Lions, Probus Clubs and Rotary Clubs and conferences. Following on from these presentations, some members of the audience will come along to clean up events or even in some cases, begin hosting their own.

As well as being a guest reporter for regional TV news programme, BBC Spotlight, Emily also attracted international media attention when she wore a dress made from discarded Walkers crisp packets to her graduation ceremony as a marine biologist. Since then, along with pressure brought by other campaigners, Walkers have pledged that they will make all packaging 100% recyclable, compostable or biodegradable by 2025.

Additionally, Emily has also worked with the global vehicle manufacturing corporation, Nissan, who have now increased the amount of recycled plastic content in their vehicles and given each of their global staff two paid days a year to volunteer in their community.

Award recipients have been put forward by adults who know the young people in a professional capacity and recognised their efforts as a positive contribution to society.

John Berryman, President of the Rotary Club of Lostwithiel, said: “Emily first came to our attention at a Rotary Conference in Plymouth, a truly inspirational speaker! She went on to win the Rotary in Great Britain and Ireland Young Citizen Award.

“Emily is dedicated to her cause and truly talks the talk and walks the walk inspiring many in our communities.”

There are 13 Diana Award Judging Panels representing each UK region or nation and a further three panels representing countries outside of the UK. Each panel consist of three judges; one young person, an education or youth work professional, and a business or government representative. The panels have an important main purpose: to determine which nominations from each UK region/nation/country will receive The Diana Award.

Nominations are judged using the Criteria Guide and Scoring Guide which have been created to measure quality of youth social action.

Tessy Ojo, CEO of The Diana Award, said: “We congratulate all our new Diana Award recipients who are changemakers for their generation. We know by receiving this honour they will inspire more young people to get involved in their communities and begin their own journey as active citizens.

“For over twenty years The Diana Award has valued and invested in young people encouraging them to continue to make positive change in their communities and lives of others.”