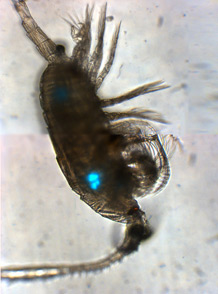 Many marine animals have been shown to ingest microbeads, mistaking them for food.

University of Exeter welcomes call for ban on microbeads in cosmetics

A University of Exeter academic has welcomed calls from MPs for a ban on the use of microbeads in cosmetics because of the marine pollution they are causing.

The politicians used evidence from Professor Tamara Galloway, an expert in marine pollution, in making their recommendations.

The members of the Environmental Audit Committee have said there should be a national ban on microbeads, used in exfoliating scrubs, toothpaste and shaving gel, by the end of 2017. They also want the Government to introduce a new clear labelling scheme so consumers know if products contain microbeads.

Professor Galloway and her team study the health effects of microplastics pollution. She was called as an expert witness to give oral evidence to the committee’s recent hearing in the House of Commons.

She said: “Pollution from microbeads is a truly global problem. Tides and currents can carry pollution across oceans to countries a long distance from where they were originally released. Ideally, any legislation to control them should be on an international level.

“The call for a UK ban is a very welcome step in the right direction. The best way to reduce marine pollution and protect marine animals from harm is to stop throwing things into the ocean in the first place.”

Microplastic pollution comes from the fragmentation of larger pieces of plastic waste, small synthetic fibres from clothing and the microbeads used in cosmetics and other products. It is estimated that as much as 86 tonnes of microplastics is released into the environment every year in the UK from facial exfoliants alone.

“Microbeads don’t biodegrade and instead accumulate in the oceans. Our research has shown that many marine animals ingest microbeads, mistaking them for food. They can become lodged in the animal’s gut, and prevent them from eating nutritious food. They can also pass chemicals into the animal’s tissues. When these animals are eaten, the microplastics and the chemicals they contain can be passed through the food chain too.

“It has been estimated that an average plate of oysters could contain up to 50 plastic particles. We don’t yet have any evidence for the harm that this might cause, but most people would probably prefer not to be eating microbeads with their food.”