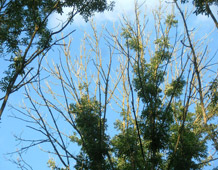 The ash dieback fungus could spread more quickly and affect more trees than previously expected, according to research at the University of Exeter.

Exeter scientists have discovered that asexual spores of the ash dieback fungus (Hymenoscyphus fraxineus) are infectious and can germinate on leaves or infect seedlings via soil.

It was previously thought that these spores could not germinate alone, and only functioned as the male part of sexual reproduction. This meant the fungus could only reproduce in part of its life cycle – on fallen leaves, usually in spring – but the asexual form is prolific in producing spores and can do so for much of the year.

The study, carried out as part of the Nornex consortium, funded by the BBSRC and DEFRA, and published in the journal Scientific Reports, reveals additional routes for the spread of the fungus, including by the transfer of soil between sites.

“It is important to know that if you’ve had ash trees in soil and you move that soil, you could be moving live fungus,” said lead author Dr Helen Fones.

She added: “The life cycle of the fungus is different from what we thought.

It was believed that the fungus only multiplied by sexual reproduction but this is not the case, and this must now be taken into account in efforts to stop ash dieback.”

Professor Sarah Gurr, who orchestrated this work at Exeter, said: “A greater understanding of the life cycle of this damaging pathogen will improve disease control strategies”

Asexual Hymenoscyphus fraxineus spores could perhaps be carried by wind, insects or water.

The finding that they can germinate on ash plants and in forest debris means more strains of the fungus can proliferate in any one cluster of ash trees than previously thought, increasing gene flow between the strains and possibly leading to faster fungal evolution.

It is possible that this could help the fungus evolve to attack new ash varieties or even other members of the Oleaceae family, which includes olive, jasmine, privet and lilac.

The disease is spreading rapidly across Europe, and some experts have suggested the fungus – along with an invasive beetle called the emerald ash borer – could wipe out the trees entirely.