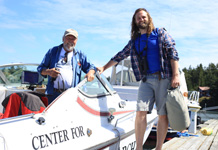 Prof Darren Croft with Ken Balcomb from the Center for Whale Research on San Juan Island. Picture by Victoria Gill

Experts to use drones to discover more about killer whales

Drones will be used to discover more about the social lives of killer whales and help conserve these amazing mammals, which are at risk of extinction.

Experts from the University of Exeter, who are working with the Center for Whale Research, believe the use of the drones could revolutionise our understanding of whale behaviour. They hope the public will support their work through a crowdfunding campaign.

It is already known that family social structures are critically important in helping whales survive at a time when their population is critically endangered. Experts at the Universities of Exeter, York and the Center for Whale Research have been able to observe these relationships during fleeting glimpses of the whales when they surface for a breath. Their work to find the reasons for long post-reproductive life was featured on a BBC documentary on Wednesday 10 August.

Now the researchers want to collect new data about how whales interact. Using drones will give them a bird's-eye view of social behaviour, allowing them to see how whales support each other. It will show which whales in a group share food, intervene during conflict and babysit. This information will allow the researchers to understand what sort of social behaviour helps whale reproductive success, and make more accurate predictions for their health and survival.

In their previous work the research team analysed hundreds of hours of video of killer whale family groups. They found female killer whales who survive after menopause pass on crucial information which helps their family members to find food during hard times. Only humans and some whales continue to live for many years after giving birth to their last offspring and this research provides possible insights into why women continue to live long after they can no longer have children.

The Radio 4 documentary, which aired at 9pm on 10 August, focuses on the vital social roles post-menopausal matriarchs have in very social killer whale community.

The experts were interviewed while conducting their research in the North Pacific coast in the USA. They have used data collected over 40 years by experts at the Center for Whale Research. The unique dataset includes birth and death dates as well as more complex data such as the genetic and social relationships between the different animals.

Female killer whales generally breed between the ages of 12 and 40, but can survive into their 90s. The academics have found post-reproductive female killer whales provide significant survival benefits to their social group by acting as ‘repositories of ecological knowledge’, leading groups when they are moving together in salmon foraging grounds. Leadership by menopausal females is especially prominent in difficult years when there are fewer salmon.

“The Southern Resident killer whales we have been working with live on a knife edge and are at risk of extinction,” said Professor Darren Croft of the University of Exeter.

“The population has been listed as endangered since 2003 and two critical questions have been highlighted - what is causing decreased reproduction and increased mortality.

“The major research priority for us is to collect new data that will allow us to record behavioural interactions. We want to do this by using un-manned aerial vehicles, drones, which will revolutionise our understanding of killer whale behaviour by getting a bird's-eye view of who interacts with whom and how. With this information we can refine our analysis of population viability and future predictions for the health and survival of these amazing animals.”

Dr Dan Franks, Reader in the University of York’s Department of Biology, said: “The killer whales that we work on are majestic and iconic animals. But they are listed as endangered and it’s thought that the population could be extinct within the next century if conditions do not improve.

“They are an extremely social animal and family members support and help each other. Drones will provide us with a bird's-eye view of interactions – such as food sharing and babysitting – allowing us to study the impact of social behaviour on their health, survival and reproduction.”

The research is funded by the Natural Environment Research Council. Professor Croft and the team hope to raise around £7,500 to buy a drone with a 35 minute flight time and a high quality camera.

Visit the project's Hubbub page to support the crowdfunding campaign.