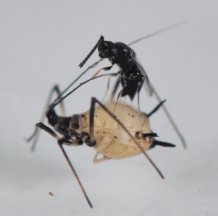 The wasps lay their eggs inside other animals.

The way parasitoid wasps feed may be gruesome, but it is an extremely efficient way to exploit prey, University of Exeter research has found.

The wasps lay their eggs inside other animals and once the larvae hatches it starts feeding on the still living host from inside – as portrayed in the movie Alien. This is an unpleasant way for the attacked animal to die but it is a clever way for the wasps to eat.

As a result parasitoids are found in large numbers, but living inside other animals doesn’t mean they are safe. Other parasitoids have developed specialist skills to find them inside their hosts and then attack them in the same way and even these hyperparasitoids can be attacked by further parasitoids.

The new study, published in the journal Proceedings of the Royal Society B today, shows that this process of parasitoids attacking other parasitoids can happen because they are incredibly efficient in turning their food into their own body mass and this efficiency increases up the food chain. One hyperparasitoid reached an efficiency rate of more than 90 per cent. These findings suggest that some food chains may therefore be longer than previously thought.

The research team, which included Dr Dirk Sanders and Dr Frank van Veen from the Centre for Ecology and Conservation at the University of Exeter’s Penryn campus, used aphids and several species of parasitoid wasp that either feed on the aphids or on the other wasps to measure the proportion of body mass that was transferred from species to species along the food chain.

Previous studies have shown that food chains are short because only between 15 and 50 per cent of prey body mass is converted into predator body mass. However, this new research shows that for parasitoids this efficiency restriction disappears higher up the chain.

Dr Sanders said: “It was a surprise to find that these parasitoid wasps are so efficient at converting their food into biomass. While many people may not be aware of them, parasitoids actually make up a large proportion of animal life on earth and they are often important in the control of agricultural pests. These new results could have a big impact on our understanding of these important and much-studied systems.

“We think it indicates that there may be previously overlooked levels to these food webs and this is what we will be looking at now, when we take our research from the laboratory into the field.”