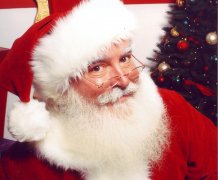 The mysteries Father Christmas have been solved by a physicist at the University of Exeter. Image courtesy of Jonathan G Meath.

The mystery of how Father Christmas can deliver presents to 700 million children in one night, fit down the chimney and arrive without being seen or heard has been ‘solved’ by a physicist at the University of Exeter.

Santa and his reindeer zoom around the world at such speed that – according to relativity theory – they would shrink, enabling Father Christmas and a huge sack of presents to fit down chimneys.

Dr Katy Sheen, of the University of Exeter's Penryn Campus, has a PhD in geophysics and has found a scientific explanation for why Santa is not heard arriving by children, and why they rarely catch a glimpse of him on Christmas eve.

She will explain to children at the University of Exeter’s Science of Christmas Festival on Wednesday 14th December, that Santa’s stealth delivery is partly explained by special relativity theory devised by Albert Einstein, whom Dr Sheen thinks bares a passing resemblance to Santa.

Relativity theory explains how Father Christmas can fit down the chimney. At the speeds he needs to travel to deliver presents to every child, Father Christmas shrinks – or gets thinner – in the direction he is travelling. And he has to be careful not to stop for a mince pie in a chimney, or he could grow back to full size!

Dr Sheen, a member of the Centre for Geography, Environment and Society, will tell the children that relativity also explains why Father Christmas appears not to have aged throughout the ages, because relativity can slow down clocks.

When Dr Sheen was seven years old she wrote a letter to Father Christmas asking why he never got any older. She received a response in shaky handwriting telling her it was ‘all magic’. But the budding physicist was not convinced and wanted a rational explanation – which 26 years later she has now found.

As evidence of how Father Christmas’s enormously fast delivery round has kept the years off him, she will present a picture of St Nicholas from 1901 and a photo from this year to the children at her talk.

The physicist has calculated that Santa and his reindeer would have to travel at about 10 million kilometres per hour to deliver presents to every child expected to celebrate Christmas in 31 hours (taking into account world time zones).

If millions of children have been good, and deserve bigger stockings, he may need to travel even faster. Such speed would make him change from red to green and, at greater speeds, he would disappear! Children would not be able to recognise him as he would appear as a rainbow-coloured blur, eventually disappearing to the human eye.

Travelling at more than 200,000 times faster than Usain Bolt, the world’s fastest man, the laws of physics explain why Father Christmas is rarely seen by children while delivering presents.

The Doppler effect would make Santa change colour because the light waves he releases would get squashed at such a high speed.

The Doppler effect also explains why children cannot hear Father Christmas arrive. As Santa and his sleigh approach, the sound of bells and his deep ‘ho, ho, ho’ would get higher and higher (like when an ambulance siren whizzes by) and then become completely silent, because he would move beyond human hearing range. Even the sound of Santa urging on Rudolph would become unrecognisable, and then inaudible to the human ear.

If children hear a bang on Christmas night, it may not be the sound of Santa dropping his presents, landing on their roof in his sleigh, or sliding down the chimney with a plop. Santa’s reindeer could have broken the speed of sound, resulting in a ‘sonic boom.’

Dr Sheen, a physicist working in the University of Exeter’s Geography department, is not planning to present her research to a peer-reviewed journal (it’s prepared with the festive spirit in mind), and has done the calculations in her own time to interest children in science and physics.

Sheen will demonstrate the impact of the Doppler effect – which would make Santa able to deliver his presents without detection – by letting the children listen to the sound of a speeding ambulance, even though it is much slower than Father Christmas and his sleigh.

The Doppler effect is responsible for making a siren, such as on an ambulance or a police car, increase in pitch as it comes towards you and lower pitched as it drives away. This is because the wave length changes when it moves towards and away from you.

Dr Sheen calculated how fast Father Christmas would have to travel by working out the number of households likely to be celebrating Christmas around the world, along with the number of children likely to be in them. She hopes her explanation for Santa’s stealth delivery system – and therefore his very existence – will inspire children to take a greater interest in physics, and put a science kit on the list of presents they want in their stockings.

“Visiting around 700 million children in 31 hours would mean he would have to travel at 10 million kilometres an hour if he is to deliver presents to every child,” Dr Sheen said. “How does Santa manage to reach these phenomenal speeds? Well that’s magic! However, he would certainly need a lot of fuel – so don’t forget his glass of sherry, a mince pie or two and some carrots for the reindeer!”