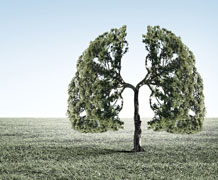 It will enable doctors to tackle one of the main killers of patients with weakened immune systems sooner and more effectively. Image courtesy of Shutterstock

Easier diagnosis for fungal infection of the lungs

A new clinical imaging method developed in collaboration with a University of Exeter academic may enable doctors to tackle one of the main killers of patients with weakened immune systems sooner and more effectively.

The spores of the fungus Aspergillus fumigatus are tiny, everywhere in the air and breathed in by humans every day.

They do not usually cause a problem for healthy people as their immune systems kill the spores before they can grow and infect the body. But in patients with an immune system weakened by leukaemia or bone marrow transplantation, the fungus faces little resistance as it settles into the lungs and can lead to a frequently fatal disease known as invasive pulmonary aspergillosis.

This infectious disease is one of the most common causes of death in immunocompromised patients. Early, targeted treatment is needed to tackle the disease effectively but has been difficult until now because of the lack of fast and reliable methods for diagnosis.

Professor Christopher Thornton, Associate Professor of Fungal Immunology and Director of the University of Exeter spin-out company ISCA Diagnostics, has worked with colleagues from the Tübingen University and University Hospitals, Universitätsklinikum Essen, Paul Scherrer Institute and other European partners, to develop a promising new diagnostic process and tested it in a disease model.

The researchers are working within the EU consortium MATHIAS, coordinated by Professor Bernd Pichler of Tübingen’s Werner Siemens Imaging Center. Their latest findings are published in the leading scientific journal Proceedings of the National Academy of Sciences of the United States of America.

The new test involves attaching radioactively labelled antibodies to the infecting structures formed by the growing fungus, making it visible to doctors. The academics have used a combination of PET and MRI imaging, diagnostic technologies present in many hospitals, to identify the disease and to rule out lung infections caused by other pathogens such as bacteria or viruses.

Until now, doctors seeking to diagnose invasive aspergillosis had to take samples of tissue or fluid from the lungs of patients with weakened immune systems who displayed abnormal symptoms.

This work is an example of interdisciplinary cooperation from research teams across Europe enabling diagnostic markers for human use to be created.

Professor Thornton said: “The process we have developed is currently being adapted for humans, which means that patients could be spared these unpleasant and sometimes dangerous procedures in the future and doctors will gain valuable time for successful treatment.

“This test allows a more accurate and speedy diagnosis of an infection which can kill those who have a weakened immune system. This is the first use of this cutting-edge technology in fungal disease diagnosis and we hope it will keep more people alive. It is estimated that as many as 200,000 people globally die of this infection each year. This technology has the potential to bring about a radical shift in medical practice around the world and will act as a paradigm for detection of other potentially fatal diseases.”

The MATHIAS consortium was established to develop novel state-of-the-art techniques with which to diagnose and treat invasive aspergillosis. The European Union is providing 6 million Euros in sponsorship for the consortium, which includes researchers from the UK, Germany, France, Denmark and Switzerland.