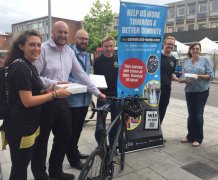 The first stage of a commuter-driven initiative designed to help reduce traffic congestion has revealed some fascinating results, organisers have said.

Experts from the University of Exeter launched the project earlier this year to determine what factors influence the time and routes chosen by people travelling to and from the city.

As part of the project, the team hosted an online survey - www.commute-exeter.com - aimed at anyone aged 17 and over who commutes for work or study.

Now, having collated the thousands of responses received, the team has revealed how influential the severity of traffic congestion can be to how people choose to travel, if they are aware before they start their journey.

The team allocated respondents into five distinctive groups as part of analysing the results, depending on whether they predominantly walk/run, cycle, use public transport, use a motor vehicle, or a combination within one journey (e.g. Park and Ride).

The model was also used to explore the commuting behaviour and related characteristics for each group and identified the most significant factors that influence people’s behaviours and choices.

Dr Sal Lampkin, from the University of Exeter’s Geography department and part of the project said: “The results of our survey are very encouraging and give us a great basis for the start of Phase 2 when we will be working together with the Exeter public to create some tangible ideas to address the congestion”

The survey is part of a ground-breaking, two-year intelligent transport project for the area involving the University, in partnership with Exeter City Council, Devon County Council and a consortium led by NTT DATA, a leading global IT services provider.

Through the project, called Engaged Smart Transport, the group aims to identify solutions that will alleviate traffic congestion in and around Exeter. The group will use real-time traffic and weather sensor data, combined with other data sources such as eyewitness and behavioural information to better understand the factors affecting people’s travel behaviour.

It is hoped that the results of the project, including the survey, will reveal where and why congestion happens and identify solutions to address these problems. The consortium has been awarded match funding by Innovate, the UK Government’s innovation agency and NERC, one of the UK Research Councils.

A selection of the results of the survey are available on the website (www.commute-exeter.com), and will provide the basis for the Phase 2 of the project, which will launch in the new year.

Dr Lampkin said: “Phase 2 consists of a series of workshops in the New Year involving commuters in the region, one for each of the five groups we have identified.

“We will start recruiting for these workshops very shortly so look out for more information, especially if you completed the survey. We are very keen to hear your opinions and ideas on how we may be able to solve some of the traffic congestions issues many of us are very familiar with. “