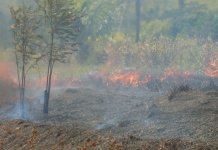 Carbon emissions from the Brazilian Amazon are increasingly dominated by forest fires during extreme droughts rather than by emissions from fires directly associated with the deforestation process, according to a study in Nature Communications.

The authors suggest that recurrent 21st century droughts may undermine achievements in reducing emissions from deforestation in this region.

Dr Luiz Aragão, from the University of Exeter and the Brazilian National Institute for Space Research (INPE), and colleagues used satellite data and greenhouse gas inventories to assess drought impacts on fire incidence and associated carbon emissions between 2003 and 2015 in the Brazilian Amazon.

The authors found that despite a 76% decline in deforestation rates over the past 13 years, fire incidence increased by 36% during the 2015 drought compared to the preceding 12 years.

They estimate that forest fires during drought years alone contribute on average emissions of one billion tonnes of CO2 annually to the atmosphere, which are more than half those from old-growth forest deforestation.

According to Dr Aragão, this is the first time scientists have clearly demonstrated how forest fires can become widely spread during recent droughts and how much they influence Amazonian carbon emissions in a decadal scale.

He emphasizes that the suite of satellites currently in operation allows the retrieval of data on current climate, atmospheric carbon content and the status of terrestrial ecosystems.

The combination of such data is already permitting Dr Aragao’s research laboratory at INPE to develop robust methodologies for understanding and accounting for carbon emissions from forest degradation, one of the bottlenecks for accurately monitoring, verifying and reporting the Amazonian carbon budget.

Lessons learned with this study are important because some observations and models indicate that the intensity and frequency of droughts in Amazonia may increase as a consequence of climate change and deforestation, explains Jose Marengo from the Brazilian Monitoring Center for Natural Disaster Alert (CEMADEN).

Dr Marengo adds that three “droughts of the century” in 2005, 2010, 2015/2016 have occurred in the region due to a warmer tropical North Atlantic ocean or to El Nino, and the intensification of these phenomena in the future favours more droughts.

Dr Liana Anderson, also from CEMADEN, says if changes in the near future climate are consistent with model results and no policy actions are taken to efficiently predict and avoid fire occurrence, she expects that carbon emissions from forest fires would be sustained in an analogue way as demonstrated by the study.

The study highlights that Brazil has made substantive advances to report emissions from deforestation.

However, based on the results, Brazil needs urgently to focus on incorporating into estimates, CO2 losses associated with fires unrelated to the deforestation process.

Governments must be aware of these values to propose realistic and effective solutions to maintain low deforestation levels, find new practices of land management and curb fire incidence.

These actions will be of utmost importance for reducing future carbon emissions from the Brazilian Amazon.

The authors argue that ongoing pervasive land-use activities and the intensification of extreme droughts are likely to increase fire emissions unrelated to the deforestation, risking the stability of forest carbon stocks and undermining the biodiversity co-benefits achievable in carbon conservation schemes, such as reducing emissions from deforestation and forest degradation (REDD+).