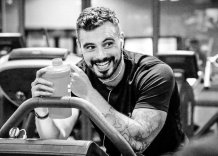 This is all in a day’s work for Josh Llewellyn-Jones, who has cystic fibrosis and is determined to promote exercise to other people with the condition.

Josh – whose 24-hour challenge last year also included rowing 20 miles, 10 miles running and 10 on a cross-trainer, 1,000 squats, 3,000 abdominal crunches and lifting 100 tonnes of weights – will visit the University of Exeter on Tuesday 6 February.

The benefits of exercise for people with cystic fibrosis are widely accepted, but many people with the condition – in which the lungs and digestive system can become clogged with mucus – are nervous about exercising.

Josh said he was “delighted” to be visiting the Children’s Health and Exercise Research Centre.

“Having been involved in sport from a very young age has no doubt helped with living with cystic fibrosis and ultimately increased my life expectancy,” he said.

“I can’t wait to see first-hand the work they’re carrying out in Exeter to show the benefits of exercise for people with CF.

“Hopefully I can add some insight into my exercise regime and to show how it’s helped me in the last 30 years, including last year’s 24-hour challenge.”

Josh, who founded a charity called CF Warriors, is organising the 24hrs4cf Warrior Games this June, when teams of four will compete in a 24-hour exercise challenge.

As well as raising awareness and tens of thousands of pounds for the Cystic Fibrosis Trust, Josh is working with University of Exeter researchers on a project which aims to promote physical activity among adolescents with cystic fibrosis.

During his visit on 6 February, he will give a talk and complete fitness tests at the university’s St Luke’s Campus.

Researcher Dr Sarah Denford, who invited Josh to the university, said: “There is little doubt that exercise is beneficial for people with cystic fibrosis, but some people with the condition shy away from exercise.

“Because of the impact that cystic fibrosis has on the pancreas, the body is unable to absorb much energy from food, which can result in people being underweight. They may be reluctant to exercise because they struggle to keep their weight up, or feel too self-conscious to exercise.

“There’s also a lot of fear about pushing themselves and how much they can do safely, especially in terms of strain on their lungs.

“However, it’s best to be as active as possible, and hopefully Josh can inspire people to do whatever they can.”

The university is part of one of the Cystic Fibrosis Trust’s Strategic Research Centres (SRCs).

SRCs were developed to “bring together scientists from across the UK and beyond, to work on ground-breaking research to benefit people with CF”.

Researchers at the universities of Exeter, Swansea, LaTrobe, UCL and Toronto have joined together with clinical staff at the Royal Devon and Exeter, Great Ormond Street and Sick Kids to develop resources to help doctors and their support teams prescribe exercise to young people with CF.