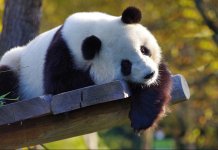 YouTube channels run by zoos focus on entertainment over education, according to a new study.

The videos also focus disproportionately on mammals, rather than reflecting the diversity of zoos' animals.

Conservation was the focus of just 3% of zoo videos in the study – but it found that conservation content in videos is gradually increasing.

The study evaluated the most recent and most-viewed videos, so the findings partly reflect the public's preference for certain species and content.

Of the animals that appeared in zoos' most-viewed videos, the top nine were mammals – with giant pandas top of the list – and the only non-mammals were penguins in tenth place.

"They key question is: what are zoos using YouTube for?" said Dr Paul Rose, of the University of Exeter.

"If the aim is to get people to visit the zoo, then a focus on entertainment and popular species might make sense.

"This way, education about wildlife and conservation can be done once people get to the zoo, where they will spend much more time than they would watching a YouTube video.

"However, some zoos have large YouTube audiences, so they should carefully consider how they represent different classes of animal, and how they can create educational material in interesting and accessible forms.

"If an animal is in a zoo's collection, there should be a way for it to be promoted."

Dr Rose said he was encouraged to see an increased focus on conservation in zoo videos.

For example, videos about animals of conservation concern on the IUCN Red List have featured more often in recent years.

Lead author Thomas Llewellyn, a graduate from UWE's Science Communication Unit, said: “It is important that zoos produce a variety of conservation-focused content for a range of different animals.

“Whilst it is reassuring to see YouTube channels upload more conservation-focused videos in recent times, this research is especially important to the conservation projects associated with those ‘favoured animals'.

“There is no doubt that YouTube has the potential to become an effective and efficient tool for global conservation education, but more research is needed to be done."

The study's information was gathered before the COVID pandemic, and the content posted on many zoo YouTube channels has changed dramatically since then.

“With zoo admissions essentially being non-existent this year, the pandemic has only emphasised the importance of social media for this type of online outreach”, added Llewellyn.

The researchers evaluated the content of 1,000 videos from 20 zoological organisations (50 most-viewed videos from each channel) from 2006 to 2019. More than 75% of these videos focussed on mammals.

Separately, educational content in a subsample of 300 of the most viewed and most recent videos from three zoo YouTube channels was catalogued and evaluated for the period 2016 to 2019.

The paper, published in the Journal of Zoo and Botanical Gardens, is entitled: "Education is entertainment? Zoo science communication on YouTube."