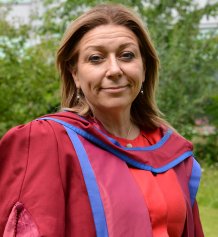 Professor Elaine Bignell has joined the University’s Medical Research Council (MRC) Centre for Medical Mycology from the University of Manchester.

Professor Bignell specialises in leading research into lung disease caused by the major mould pathogen of humans, called Aspergillus – which is found in decaying leaves and compost and on plants, trees and grain crops.

People with healthy immune systems are able to combat these spores when inhaled, but those who have a weakened immune system from illness or medications have fewer infection-fighting cells. This allows aspergillus to take hold, invading the lungs and, in the most serious cases, other parts of the body.

Professor Bignell’s research has focussed on defining the cause of the disease, and is working on developing treatments, vaccines and diagnostic tools.

Welcoming Professor Bignell to the University, the Director of the MRC Centre for Medical Mycology Professor Gordon Brown said: “We are delighted that Professor Elaine Bignell has decided to join our research centre.

“Elaine brings world leading expertise in understanding how fungi cause disease. Her particular expertise is with a major fungal pathogen of humans, called Aspergillus, that is responsible for hundreds of thousands of life threatening infections every year and contributes to severe allergic disease that affects millions”.

A molecular geneticist by training, Professor Bignell began her independent research career as an MRC New Investigator, and by securing a fast-track to Lectureship Award at Imperial College London.

She later played a major role in establishing the Manchester Fungal Infection Group (MFIG) and in securing its success as a leading International Centre of Excellence for fungal diseases research, having served as a Director of this unit for 5 years (2015 – 2020).

The Medical Research Council (MRC) Centre for Medical Mycology recently moved from Aberdeen to join with existing Exeter scientists to create one of the largest groups of mycology (fungal research) experts in the world.

The centre will expand internationally with an ambitious network of research activity in low- and middle-income countries which suffer from the greatest burden of fungal-related diseases.

It has already established a unit in Cape Town, South Africa, to serve as a research and training hub for the whole of Africa. The group aims to open similar hubs in South America and Asia.