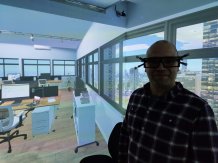 University of Exeter Sport and Health Sciences PhD student Joao Mineiro has been awarded an EPSRC-funded studentship to explore whether virtual reality can be used in the treatment of chronic pain.

Joao was inspired to apply for the research funding after he won a competition challenging delegates to come up with ideas for using one of the two VSimulators facilities, based at the Universities of Exeter and Bath.

The competition prize offered the chance to be one of the first to use the brand new, globally unique research facility at the University of Bath, which combines a motion platform with immersive projected virtual reality and environmental control, which launched in October.

Cornwall-based physiotherapist Joao attended the launch in place of his PhD supervisor Dr Gavin Buckingham in Sport and Health Sciences, who had been unable to attend, but was interested in finding out more about the VSimulator.

Joao said: “When thinking about ideas to put on my competition card entry, the presentations at the launch made me realise the Bath VSimulator would be an interesting tool to study how people in pain integrate multi-sensory cues. This could include visual cues such as colour and light. This could also include proprioceptive cues such as vibration for which literature is scant.”

He added: “There were so many people at the event, I didn’t expect to win. I was very excited when I received the email to say I had been successful.”

Joao travelled to Bath with supervisor Gavin to meet Dr Antony Darby, the lead academic for the Bath facility, and Dr Jon Slade, Experimental Officer, and experienced being immersed in the VSimulator for himself.

They worked out how the facility could be used to investigate pain, including whether there were any differences in the way pain free people and those experiencing experimental pain perceived and tolerated vibration. Joao had previously been studying for a self-funded PhD researching how people perceive object weight and how that relates to illusions in VR. However, winning the competition to use the VSimulator inspired him to apply for a funded EPSRC studentship, which he was awarded.

He is starting the PhD in September, with the supervisory team including Gavin, Dr Will Young and Professor James Brownjohn, lead academic for the Exeter VSimulator. The results of his study using the Bath VSimulator will feed into his PhD.

Joao said: “I'm excited about using the VSimulators state of the art facilities to study such a complex problem like pain. The literature shows that, currently, virtual reality-based interventions for pain are mainly used for distraction, with immersive environments that people watch or walk around. But there has been little work carried out into how people in pain interact with immersive virtual reality, which is very relevant.”

Dr Gavin Buckingham said: “I’m incredibly excited that Joao has had this opportunity to use such this state-of-the-art facility to conduct a unique research project on a topic of real clinical importance”.

The University of Bath, including the structures lab housing the VSimulators facility, is currently closed during the COVID19 lockdown, but the project will be continued, with social distancing measures in place, once operation resumes.

Dr Antony Darby said: “It’s exciting to do something outside what we had envisaged when this started. I’m intrigued as to the possibilities that this project provides us with in terms of demonstrating the capability of the facility. We’re looking forward to working on this when we finally get back in the labs.”