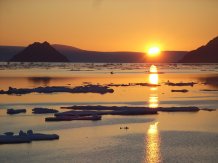 Researchers have identified the key factors that influence a vital pattern of ocean currents.

Many scientists think that this heat transport makes areas including north-west Europe and the UK warmer than they would otherwise be.

Climate models suggest the AMOC is likely to weaken over the coming decades, with widespread implications for regional and global climate.

The new study – led by the universities of Exeter and Oxford, and published in Nature Geoscience – pinpoints the causes of monthly and annual AMOC variation and finds a differing picture at two key locations.

Observational data came from large arrays of monitoring equipment – off the coasts of Florida and Africa, and in the North Atlantic between Greenland and Scotland – run by the international RAPID and OSNAP projects.

"Understanding AMOC variability is challenging because the circulation is influenced by multiple factors that all vary and whose overlapping impacts persist for years," said lead author Dr Yavor Kostov, of the Department of Geography at the University of Exeter.

"Our findings reveal the vital role of winds in driving changes in this ocean circulation.

"Winds were a key factor both in the sub-tropical and sub-polar locations we examined.

"As the climate continues to change, more efforts should be concentrated on monitoring those winds – especially in key regions on continental boundaries and the eastern coast of Greenland – and understanding what drives changes in them."

While AMOC variability off the southern USA is dominated by the impact of winds, variability in the North Atlantic is generated by the combined effects of winds, heat and freshwater anomalies.

"Our reconstruction suggests that, compared to the subtropics, the overturning circulation in the subpolar North Atlantic is more sensitive to changes in the background ocean state such as shifts in the sites of deep convection," Dr Kostov said.

"This implies that future climate change may alter annual AMOC variability in this region. It emphasises the need for continued observations of the subpolar North Atlantic ocean."

The study also finds that changes in the surface temperature and salinity near Canada and Greenland can trigger a delayed remote impact on the Atlantic circulation as far south as Florida.

Funding for this study came from the UK Natural Environment Research Council, and the National Science Foundation, National Oceanic and Atmospheric Administration, NASA and Simons Foundation in the United States.

The paper, published in the journal Nature Geoscience, is entitled: "Distinct sources of interannual subtropical and subpolar Atlantic overturning variability."