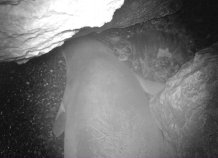 The Mediterranean monk seal is classified as "endangered", with a total population of about 700.

The new study – by the University of Exeter and the Society for the Protection of Turtles (SPOT) – used camera-traps to confirm breeding in caves in northern Cyprus, with at least three pups born from 2016-19 at one cave.

Only certain caves are suitable for monk seal breeding and resting, so – although the numbers are small – the researchers say urgent action is needed to protect these caves.

"This area of coastline in being developed rapidly, especially for construction of hotels," said Dr Robin Snape, of the Centre for Ecology and Conservation on Exeter's Penryn Campus in Cornwall.

"A survey of the coast in 2007 found 39 possible breeding caves, and some of these have already been destroyed.

"The main breeding site we identify in this study currently has no protected status, and we are working with local authorities to try to change this."

Lead author Dr Damla Beton, of SPOT, added: "Another major threat to monk seals in this area is bycatch (accidental catching by fisheries).

"We are working with fishers and government ministries to ensure protection areas at sea, because at present no measures are implemented to mitigate bycatch in the core areas used by these seals."

The team has now established long-term monitoring of the breeding caves, aiming to determine the size of this seal population.

The study, carried out in collaboration with the Middle Eastern Technical University with the support of the local authorities, received funding from the MAVA Foundation.

The paper, published in Oryx – the International Journal of Conservation, is entitled: "New monitoring confirms regular breeding of the Mediterranean monk seal in Northern Cyprus."