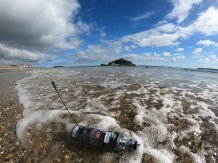 On World Ocean Day, June 8, a collaboration of scientific institutions and ocean groups from around the world will launch scientific monitoring devices into the ocean.

Seven devices, one for each G7 nation, will be launched into ocean currents around the G7 Summit’s Cornish venue ahead of the Summit starting later this week (11 June).

The launch is designed to increase understanding about how plastic pollution behaves in the ocean.

Designed to mimic a single-use plastic drinks bottle, the devices will respond to currents and winds as real bottles do.

They could potentially travel hundreds of miles over the course of the project, passing over deep ocean trenches, across major migratory routes for marine mammals and birds and out into the High Seas.

Each device will gather vital data to help scientists understand how plastic moves across the ocean and the potential risk it poses to marine wildlife along the way.

The data will also be fed into ocean observing systems.

Professor Heather Koldewey of the Zoological Society of London (ZSL) and the University of Exeter, lead scientist on the project and Director of the #OneLess campaign, said: “The small stretch of sea around Cornwall connects to a vast ocean without boundaries.

"By combining novel technology and ocean observing systems, we will obtain new insights into how marine litter behaves.

"The ocean connects us all.

"G7 leaders need to listen to science, listen to the ocean, and to act.

"Treaties on global plastic and High Seas protection would be very good places to start."

The launch of the tracking experiment is deliberately timed to coincide with the G7 Summit as scientists from every G7 nation have called on the leaders to pay urgent attention to the connection between the ocean and climate breakdown.

Setting out seven key areas for action across policy and science, the authors highlight the importance of increased ocean monitoring and scientific investigation.

Director of the International Programme on the State of the Ocean and the OneOcean campaign, Mirella von Lindenfels said: “We cannot solve the climate crisis if we do not protect the ocean.

"G7 Leaders need to listen to the ocean and take immediate action to significantly increase protection for it and awareness about its role in making life on our planet possible."

The tracking devices will be deployed in transects from zero, five and ten nautical miles offshore, and from three locations in Cornwall, each location selected to pick up different current regimes that control whether plastic firstly escapes the coastal environment and, further out to sea, where it is eventually transported to.

Dr Phil Hosegood, Associate Professor in Physical Oceanography at the University of Plymouth, said: “Plastic waste drifts around the ocean within currents that are enormously challenging to predict because of the range of scales over which they are generated.

"At small scales, tidal currents flowing past a coastal headland may create eddies (whirlpools) that trap plastic and stop it escaping to the open ocean where, at the large scale, huge current systems like the Gulf Stream move water over hundreds of kilometres.

"These sensors will therefore provide important, and extremely accurate, insights into how currents at different scales interact, particularly in coastal regions where plastic enters the marine environment, and ultimately control where plastic waste ends up."

The devices provide location data via satellite five – six times in each 24 hour period and are designed to last for two years.

A map showing their locations will go live on the #OneLess and OneOcean websites on the 8th.

They could be being transported into the Celtic Sea and Bristol Channel, or even further out into the Atlantic and north to Scotland, potentially in time for the UNFCCC CoP in November.

The scientist statement to the G7 included calls for:

Over 359 million tonnes of plastic is produced annually and production has been predicted to double in the next 20 years.

More than 40% of this amount is for single-use applications.

Assuming there are no improvements in waste management infrastructure, the cumulative quantity of plastic waste available to enter the marine environment from land could increase by approximately three times over the decade up to 2025.

More than 700 species of marine organisms have been reported to encounter plastic debris, which can result in severe physical harm or death, or more subtle effects on behaviour and ecological interactions.

The report – the first ever use of the Ocean Health Index (OHI) in the United Kingdom – analyses data on various ocean-related "goals" and gives the South West a score 65 out of 100 for ocean health.

The #OneLess campaign works with scientists, businesses, visitor attractions and governments to reduce the reliance on and numbers of single use plastic water bottles.

OneOcean is an alliance of around 100 organisations from around the world, promoting key measures to protect the ocean.

The work of ocean groups at the G7 Summit is supported by Bloomberg Philanthropies.