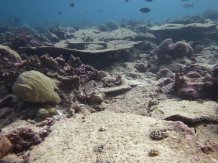 The window of opportunity to protect the structure of the world’s coral reefs is still open but time is running out, new research shows.

The study, just published in the journal PNAS, has some good news to offer amid a grim outlook, but only if rapid action is taken on global greenhouse gas emissions.

Dr Cornwall, a Rutherford Discovery Fellow, says if the world can reduce greenhouse gas emissions drastically, coral-reef growth will be reduced "but many reefs will still be able to grow".

"Some of them will even keep pace with sea-level rise," he added.

"Even if we fail with those reductions but do keep within the intermediate emissions scenario, some coral reefs will still keep growing for a short while, but by the end of the century they will all be eroding.

"If we hit the worst-case scenario, then very shortly all coral reefs will be eroding."

The research, by an interdisciplinary group of academics formed initially as a working group led by the Australian Research Council’s Centre of Excellence for Coral Reef Studies in 2016, breaks new ground.

There has been a great deal of research investigating the impact of climate change on individual corals and coralline algae, but this work gives broader projections of ocean warming and acidification, and their interaction, on the net carbonate production of coral reefs.

"We have known for more than a decade that ocean acidification will affect the ability of calcifying coral reef taxa to form their calcium carbonate skeletons, a process called 'calcification'," Dr Cornwall said.

"Also, we have known that ocean warming brings increasing frequencies of marine heatwaves that cause coral mass bleaching, but that this warming itself also reduces calcification once it gets above a certain threshold."

There are thousands of coral reefs around the world, each comprising different proportions of corals and coralline algae, with different types of bioeroders, such as parrotfish, sea urchins and cyanobacteria, and different rates of sediment production.

These contribute to either the production or erosion of the reef structure, with the balance influencing the vertical growth potential of reefs.

"The capacity of reefs to continue building and adding calcium carbonate to their structures is critical to sustaining the multiple ecosystem services that reefs provide, including their critical role in coastal protection," said Professor Perry, of Exeter's Geography department and the Global Systems Institute.

The study used data on net calcification, bioerosion and sediment dissolution rates measured or collated from 233 locations on 183 distinct reefs, 49% of them in the Atlantic Ocean, 39% in the Indian Ocean and 11% in the Pacific Ocean, and used this data to assess the carbonate production rates of these reefs.

This was then modelled against three Intergovernmental Panel on Climate Change emissions scenarios for low, medium and high-impact outcomes on ocean warming and acidification for 2050 and 2100 to assess reef growth potential.

Professor Perry said the study shows that most coral reefs will be unable to maintain growth from carbonate production by the end of the century under the medium and high-impact scenarios.

Even under the low-impact case, reefs will suffer severely reduced accretion rates.

Mean global reef net-carbonate production under these three pathways are forecast to decline by 76%, 149% and 156% respectively by 2100

Drastic reductions in greenhouse gas emissions are now needed to give coral reefs the best chance of continuing to accrete in a future ocean, lead author Dr Cornwall said.

"We are already observing global shifts in coral assemablages and severely reduced coral cover due to mass bleaching events. It is very unlikely that corals will suddenly gain the heat-tolerance required to resist these events as they become more frequent and intense," he added.

"Our only hope for these reefs now is converting to alternatives to fossil fuels as soon as possible."