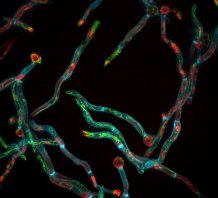 A top research centre focussed on tackling fungal diseases has relocated to the University of Exeter.

The Medical Research Council (MRC) Centre for Medical Mycology has moved from Aberdeen to join with existing Exeter scientists to create one of the largest groups of mycology (fungal research) experts in the world.

“This move places Exeter at the forefront of fungal research at a critical time,” said Professor Gordon Brown, director of the centre.

“It will complement and enhance Exeter’s existing strengths in living systems, life sciences and medicine.

“Together, Exeter’s researchers will play a leading role in improving the diagnosis, prevention and treatment of fungal disease.”

Professor Neil Gow, Deputy Vice Chancellor for Research and Impact at the University of Exeter, said: “This move will create a world-leading centre in the field of medical mycology which will establish our position as an international leader in health and life sciences, and in particular biomedical research as well as in mycology and microbiology in general.

“Our researchers will benefit from collaboration and interaction with the exceptional scientists and researchers within the MRC Centre for Medical Mycology.

“The centre has a global reputation and will bring with it further opportunities for international collaboration in this field.”

Dr Anna Kinsey, Programme Manager for Infections and Immunity at the Medical Research Council, said: “Fungal diseases can cause serious illness and death in patients with vulnerable immune systems and they are an increasingly important challenge to global human health, especially given their emerging resistance to antifungal drugs.

“The Medical Research Council Centre for Medical Mycology boosts research into tackling fungal diseases and strengthens the links between laboratory and clinical research to help address this important challenge to human health.”

The centre will expand internationally with an ambitious network of research activity in low- and middle-income countries which suffer from the greatest burden of fungal-related diseases.

It has already established a unit in Cape Town, South Africa, to serve as a research and training hub for the whole of Africa. The group aim to open similar hubs in South America and Asia.

The relocation of the Centre for Medical Mycology to Exeter will also allow the University of Exeter to expand its postgraduate teaching programme.