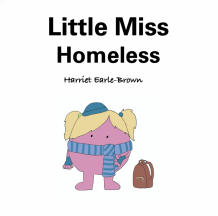 A book about Little Miss Homeless has been created to raise awareness of women's homelessness.

A not-for-profit parody of the Mr Men series, the story's main character leaves home due to domestic violence, stays in a night shelter, on a friend's sofa and on the streets.

Issues raised in the story (which is not for children) include drugs and sexual violence – and there is no happy ending for Little Miss Homeless.

"I initially produced this for an assignment during my masters here at Exeter, but as I was making it I realised it was really effective in engaging people in conversations surrounding the issues homeless women face," Earle-Brown said.

"My PhD research focuses on homeless women and their experiences of homelessness, which are often quite different compared to men.

"For instance, many homeless women must negotiate menstruation without having access to good quality sanitary products, showers, clean clothes or even a place of their own where they could curl up with a hot water bottle.

"However, most of the time we don't acknowledge the role of gender in homelessness and so these issues are often overlooked; resulting in the needs of homeless women not being met.

"I want to share the book to spread awareness of these issues."