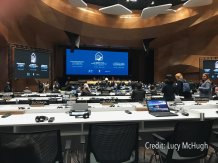 How governments actively resist a World Heritage ‘In Danger’ listing

A study published today finds that governments worldwide have repeatedly resisted the placement of 41 UNESCO World Heritage sites on a list of “World Heritage In Danger”.

This resistance is despite the sites being just as threatened, or more threatened, than those already included on the In Danger list.

An In Danger listing is intended to raise awareness of threats to sites and encourage investment in mitigation measures such as extra protection.

World Heritage sites are designated by the UN because they represent both natural and cultural heritage for global humanity, even though they sit within the jurisdiction of individuals countries.

Sites in the UK covered by the study include the Jurassic Coast (Devon and Dorset) and Giant’s Causeway (Northern Ireland).

While these are not currently threatened, the study provides lessons about the political manipulation that affects some of the world’s most iconic ecosystems.

The study is co-authored by a team of scientists from the UK, Australia and the US.

Lead author Professor Tiffany Morrison, from the ARC Centre of Excellence for Coral Reef Studies at James Cook University (Coral CoE at JCU) says some national governments responsible for these World Heritage sites use strategies of rhetoric and resistance to avoid a World Heritage In Danger listing.

The Great Barrier Reef, under the custodianship of the Australian Government, is just one of the threatened sites that continues to evade the World Heritage In Danger list.

“Avoiding an In Danger listing happens through partial compliance and by exerting diplomatic pressure on countries that are members of the World Heritage Committee,” Professor Morrison said.

World Heritage In Danger listings are increasingly politicised. However, until now, little was known about what this entailed, and what to do about it.

The study found the total number of In Danger listings has plateaued since the year 2000.

At the same time, hidden industrial lobbying and political deals associated with the listings have intensified.

“Our results also challenge the assumption that poor governance only happens in less technologically advanced economies,” said co-author Professor Katrina Brown, of the University of Exeter.

“Rich countries have just as strong incentives to avoid regulation and international oversight.

“We show that the influence of powerful industries in blocking environmental governance is prevalent in many regions and systems.

“They claim an In Danger listing diminishes their nation’s international reputation and restricts foreign investment, national productivity and local employment.

“Some also challenge the World Heritage system itself and undermine reports by scientists, conservation groups and the media.”

These lobbying efforts heighten a government’s sense of political threat by linking the listings to national economic performance, as well as to the individual reputations of politicians and senior bureaucrats.

“UNESCO is acutely aware of these dynamics and concerned about threats to its own reputation,” Professor Morrison said.

“Revealing and analysing these dynamics is a step closer to moderating them.”

The study provides new evidence for how interactions, from 1972 until 2019, between UNESCO and 102 national governments, have shaped the environmental governance and outcomes for 238 World Heritage ecosystems.

It also provides examples of how concerned stakeholders are taking countervailing strategies that harness these politics.

“Given the global investment in environmental governance over the past 50 years, it is essential to address the hidden threats to good governance and to safeguard all ecosystems,” the study concludes.

The paper, published in the journal Nature Sustainability, is entitled: “Political dynamics and governance of World Heritage ecosystems.”