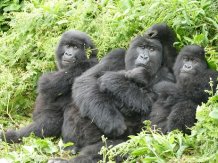 Mountain gorillas that live in oversized groups may have to limit the number of strong social relationships they form, new research suggests.

Scientists from the Dian Fossey Gorilla Fund (Fossey Fund) and University of Exeter identified up to seven categories of relationship between gorillas – ranging from close mother-offspring ties to “weak” associations.

Mountain gorillas usually live in groups of 12 to 20, and the study found the richest range of relationships in groups of this size.

When groups were smaller or larger – sometimes up to 65 gorillas – the scientists found less diversity of social relationships.

“It is often assumed that animals living in larger groups will have more diverse and complex social lives,” said Dr Robin Morrison, of the Fossey Fund and Exeter’s Centre for Research in Animal Behaviour.

“However, our study suggests that social diversity is lower in very large groups where gorillas must maintain a larger number of relationships – with most relationships falling into the weakest category.

“We cannot say for certain why this is, but it may be that gorillas only have enough time and mental energy to maintain a certain number of relationships at a given strength.

“So they keep their key relationships and simply maintain weak ties with all the other gorillas in the group.”

“Indeed, one of the big ideas in social evolution is that humans developed large brains and language to deal with social complexity.”

The research team used 12 years of data on 13 gorilla groups monitored by the Fossey Fund in Volcanoes National Park, Rwanda.

Mountain gorilla numbers in the park have risen in recent years, which may explain why unusually large groups have formed.

The gorillas live in stable social groups, moving and feeding together in the day and nesting together at night.

The study used proximity data – how much time individuals spent close together – to measure social relationships.

“In many primates, social interaction can be measured by how much time individuals spend grooming each other,” Dr Morrison said.

“However, gorillas spend less time grooming than most other primates.

“Instead, a lot of gorilla society is about who individuals choose to sit next to, and who they move away from.”

The relationship categories identified by the scientists relate to different patterns of interaction revealed by the data.

These represent a scale of from close to weak associations, but the categories cannot be simply expressed in human terms such as best friends, close friends, etc.

Lauren Brent, Associate Professor at the University of Exeter, said: “Not only were groups above a certain size not more socially diverse, but individuals living in the same group had variable levels of social complexity – some gorillas had a greater diversity of social relationships than others.

“This adds to a rich body of evidence that shows that, whether you are a human, gorilla or another type of social animal, not everyone experiences their social world in the same way.”

The researchers found that the diversity of social relationships experienced by individual gorillas varied by age and sex.

Both males and females experience a diverse range of relationships as youngsters, but this changes as they age.

While females maintain a relatively consistent diversity of relationships through adolescence and adulthood, this declines rapidly in males as they enter adolescence, reaching the lowest levels at around 14.

This is also the period when males are most likely to decide whether to leave the group they were born into – so they may be socially distancing themselves in the lead up to this departure.

If they choose to remain, as roughly half do, they then gradually build up a diverse set of relationships through adulthood as they take on key social roles protecting the group and fathering and caring for offspring.

The research findings could be useful for gorilla conservation, including efforts to limit the spread of disease.

“This is really important right now for mountain gorillas because disease is one of the major threats to their conservation.

“They catch many of the same diseases as humans, including Ebola, and it’s extremely likely they would also catch COVID-19 if they were exposed to it.

“Long-term monitoring and protection of endangered mountain gorillas is crucial, not only for their conservation but also for what we can learn from this intelligent and highly social species about how complex social behaviour, such as our own, has evolved.”

The paper, published in the journal Proceedings of the Royal Society B, is entitled: “Comparing measures of social complexity: larger mountain gorilla groups do not have a greater diversity of relationships.”