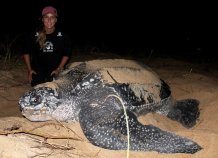 Liliana Poggio Colman with a leatherback turtle in Brazil

Scientists studied nesting sites in the state of Espírito Santo in eastern Brazil – the only place in the south-west Atlantic where leatherbacks regularly nest.

Data on this small population from 1988-2017 showed the average number of nests rose from 25.6 in the first five years of the period to 89.8 in the final five years.

The researchers, from the University of Exeter and Brazilian sea turtle conservation programme TAMAR-ICMBio, believe local conservation efforts have contributed to this increase.

But they say conservation of this population is still a concern due to climate change, pollution, coastal development and “bycatch” (accidental catch by humans fishing).

“The numbers vary year by year, but overall we have seen an increase in the number of leatherback nests in Espírito Santo,” said Dr Liliana Poggio Colman, of the Centre for Ecology and Conservation on the Exeter’s Penryn Campus in Cornwall.

“This gentle recovery is probably due, at least in part, to local conservation efforts started by Projeto TAMAR in the 1980s.

“Our study revealed a significant decrease in the size of the turtles breeding on these beaches, suggesting that new females are joining the breeding population.”

Dr Poggio Colman, who had a scholarship from the programme Science Without Borders, funded by the Brazilian government, added: “We are encouraged by what we have found, but this is a small population – fewer than 20 nesting females per year, each laying several clutches – so their conservation will remain a concern.”

Throughout the study period, nests were concentrated in the southern part of the 100-mile (160km) study area, with the protection of core nesting areas being key for the effective conservation of this population.

Professor Brendan Godley, who was one of Dr Poggio Colman’s PhD supervisors, added: “It was a great pleasure to help facilitate this collaborative work in Brazil.

“By chance, the team was in the field when a major spill of waste mining material impacted in the area in 2015. Average hatching success has, however, remained fairly steady at about 66%.”