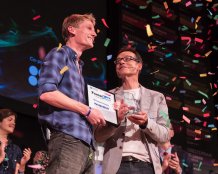 A University of Exeter scientist has won FameLab International, a global competition to find the best new science communicators.

Marine biologist Tim Gordon progressed through preliminary rounds and regional finals earlier this year, before winning the UK final of FameLab at the Cheltenham Science Festival on Monday. Judge Dr Vivienne Parry OBE described his presentation as “authentic, honest and absolutely passionate about his subject”, and he was awarded £3,000 as the national champion.

He then represented the UK in an international semi-final, qualifying for the overall final on Thursday night.

Tim’s talks in the competition have been on subjects including rainforests, coral reefs, climate change, bioacoustics and new conservation technologies.

Tim said: “Representing Exeter and the UK in this competition has been a great opportunity to share the research that my colleagues and I do, whilst also being inspired by the work of other scientists from around the world.

“Science communication is very important to me: our research here at Exeter aims to understand and protect the most beautiful and valuable ecosystems on the planet. The more people that we can engage and involve in that mission, the better our chances of success.”

FameLab participants have three minutes to win over the judges and audience with a scientific talk that excels in its content, clarity and charisma.

Each year, the British Council runs national FameLab competitions in about 30 countries. The winners travel to Cheltenham Science Festival in the UK for the international final in June. To date, over 9,000 scientists have taken part in the competition, which has an estimated media reach of 54 million people.

The University of Exeter is home to some of the world’s leading experts on the marine environment.

On World Oceans Day (June 8) the university is launching the new Exeter Marine Fund, to support transformative research and talented academics who share their work on a global scale.

To donate to the campaign, visit: exeter.hubbub.net/p/marineresearch/