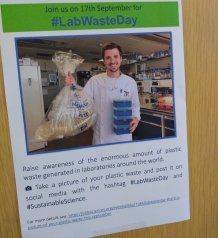 Scientists at the University of Exeter’s Penryn campus in Cornwall have taken to social media to help raise awareness of the amount of plastic waste generated in laboratories and encourage more sustainable science.

This week (17 September) researchers across the world were encouraged to take part in an initiative, known as #LabWasteDay, by taking pictures of themselves with the plastic waste they generated that day and posting them on social media using the hashtags #LabWasteDay and #SustainableScience.

The environmental initiative was created by eLife with the aim to raise awareness about the sheer amount of plastic waste generated in laboratories around the world.

Throughout the day, researchers were encouraged to follow the conversations on social media and to invite others to contribute their own pictures and captions, as well as ideas on how waste generation in scientific labs can be reduced.

Daniela Farina, Laboratory Manager at the University’s Environment and Sustainability Institute, who organised this year’s #LabWasteDay at the Penryn Campus in Cornwall, said she is trying to trying to introduce several sustainability initiatives in the lab, inspired by the University of Exeter declaring a climate emergency.

“Since we are the Environment and Sustainability Institute, I believe we should be trailblazing sustainable lab initiatives.

“I am rolling out some plans to reduce the use of disposables and increase the amount of recycling we do (of course as much as possible without hindering the research) and thought that the #LabWasteDay initiative is a great way to make the lab users more aware of the amount of waste they generate daily.

“In the coming week I am going to use this to try and convince people to join some other waste-limiting programmes - so hopefully we can have much smaller waste bags next year around!”

To see some of the pictures from the day, search for #LabWasteDay and #SustainableScience on Twitter.