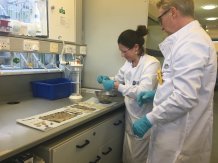 University of Exeter experts will give a fascinating insight into environmental impacts of modern-day lifestyle choices when they appear on the BBC’s latest Blue Planet UK series.

Exeter researchers will appear on two episodes of the critically acclaimed series, discussing how everyday consumer habits are affecting both endangered marine life and our oceans.

On Wednesday, Professor John Love and Nicky Cunningham will be seen conducting the first fascinating part of an autopsy on the Sidmouth fatberg – a 210ft-long ‘solid monster’ found in the sewers underneath the Devon seaside town by South West Water.

On Thursday, Dr Andrew Griffiths and Catherine Hobbs will be discussing their pioneering research that revealed endangered species of hammerhead, mako and dogfish are amongst sharks being sold as food in the UK.

Professor Steve Simpson and his PhD student Tim Gordon, both marine biologists specialising in fish ecology and bioacoustics, are also set to star in the final episode of Blue Planet Live, which will be aired on Sunday.

The Blue Planet series, which captures the nation’s imagination and highlighted the beauty and plight of marine life around the world, are running two new series through this week.

Wednesday’s episode will see Professor Love and Nicky Cunningham conduct some of the first stages of the autopsy for the Sidmouth.

Fatbergs form when people put things such as fat, wet wipes, sanitary towels, nappies and condoms, down sinks and toilets. The example discovered at Sidmouth was more than 200 foot - longer than the height of the Leaning Tower of Pisa.

During the autopsy, the research team will be seen making the first steps into discovering what everyday items were found in the fatberg, giving a fascinating glimpse into what is being flushed away from households in the traditional seaside town.

Ms Cunningham said: “People have been fascinated with the make-up of the Sidmouth fatberg since it was discovered, and this will be the first glimpse of what we are finding within the samples.

“While we are still in the process of finding out more about the fatberg, we know that this autopsy will give us a real insight into how our habits are affecting the environment around us, and perhaps even what small changes we can make to reduce our impact.”

On Thursday, Dr Andrew Griffiths and Catherine Hobbs will discuss their recent research that showed endangered shark species are being sold as food across the UK.

The scientists sampled shark products from fishmongers and chip shops, as well as shark fins from an Asian food wholesaler in the UK. They found that the majority of chip shop samples (usually sold under generic names like huss, rock salmon and rock eel) were spiny dogfish – a species “endangered” in Europe and “vulnerable” worldwide.

The researchers have called for more accurate food labelling so people know what species they are eating.

Dr Griffiths said: “It is really exciting to be involved in the Blue Planet series, which really drives public awareness of so many environmental issues that we face today.

“The research showed that it can be really difficult for consumers to know what they are buying, so even if people might think they’re getting a sustainably sourced product they may actually be buying a threatened species.”

Blue Planet UK is screened at 4.30pm each day on BBC1, and is available on iPlayer following the initial broadcast.