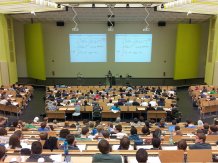 The research examined students’ feelings of belonging and engagement.

“Ethnic spaces” at US universities make students from underrepresented minority groups feel a greater sense of belonging and engagement with their university, new research suggests.

Many US universities already have designated facilities, such as social areas and cultural centres, specifically for “students of colour”.

But at some institutions, such spaces and programmes have been controversial, and some have had budgets cut.

The new studies, by the universities of Washington and Exeter, aimed to test the value that university students — of many ethnicities — place on those facilities.

For the research, hundreds of students on the University of Washington’s Seattle campus read about plans for their university to add either a new ethnic space or a general space.

Among underrepresented minority students who participated in the study, reading about plans for an ethnic space led to stronger feelings of belonging, support and engagement in the university.

“This work is important because we know that students from ethnic minority groups can feel less belonging in institutions where they are underrepresented,” said Dr Teri Kirby, senior lecturer at the University of Exeter and lead author of the study.

“We need to understand how to make underrepresented minority students feel more welcome. Our research suggests that ethnic spaces are one good way to achieve this.”

Of the top 26 universities on US News and World Report’s undergraduate rankings for 2020, 18 have a space for minority students.

At the University of Washington (UW), for example, the Samuel E. Kelly Ethnic Cultural Center opened in 1968. Over the years, it has been renovated and expanded and is now believed to be the largest college cultural center in the United States.

Other studies have shown that organizations and institutions can increase people’s sense of belonging through materials, policies and programmes that do not marginalise their identities, as well as physical space.

UW psychology professor Sapna Cheryan, a co-author of the current study on ethnic spaces, previously led a study about the ways computer science classrooms often appear unwelcoming to many women, potentially turning them away from the field.

In the current set of studies, the research team drew from the UW campus.

The research was divided into four separate studies, each presenting students with slightly different versions of plans for ethnic spaces or general student spaces.

Results showed that reading about a new ethnic space increased feelings of belonging among underrepresented minority students regardless of whether they intended to use it.

“This suggests the importance of these spaces is partly about the signal they send,” said Dr Kirby. “They are more than just gathering places – they show students from underrepresented ethnic groups that they are welcome at the university.”

However, these white students felt lower senses of belonging, support and campus engagement than white students who read about a general student space.

The studies did not examine the cause of this difference, so it is unclear whether the general student centre boosted their senses of belonging, support and engagement, whether the ethnic space reduced them, or both.

Overall, the studies underscore how even the idea of a space for minority students can boost their feelings of inclusion.

“Creating physical spaces for underrepresented minority students (and supporting those that already exist) is one powerful way to reduce academic disparities by signalling to underrepresented students that they are valued by the broader university,” Professor Cheryan said.

The study lends itself to further exploration, the authors said, such as the impact of ethnic spaces on specific groups, and whether consequences of ethnic spaces vary based on the degree of campus diversity.

Kirby and co-author Joshua Tabak were funded by the National Science Foundation’s Graduate Research Fellowships Program. Kirby was also funded by the Economic and Social Research Council. Maria Ilac was also a co-author.

For more information, contact Kirby at T.Kirby@Exeter.ac.uk or Cheryan at scheryan@uw.edu.

The paper, published in the journal Social Psychological and Personality Science, is entitled: “The Symbolic Value of Ethnic Spaces.”