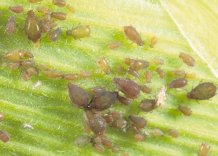 Insects and diseases that damage crops are probably present in many places thought to be free of them, new research shows.

Pests that have not been reported in a certain area are usually assumed to be absent, but analysis by the University of Exeter shows many pests are “currently unobserved, but probably present” (a likelihood of more than 75%).

The study identified large numbers of pests in this category in China, India, southern Brazil and some countries of the former USSR.

The researchers used data for 1,739 pests in the Centre for Agriculture and Bioscience International (CABI) pest distribution database.

“Our model allows us to quantify the risk that a certain pest is present in a certain place,” said Dr Dan Bebber, of the University of Exeter.

“Our trick for testing model accuracy was to use pest observations from China published in the Chinese literature, which have not yet been incorporated into global pest databases.

“A lot of species that people are worried about finding in certain places are probably already there.

“That early stage is crucial if we want to stop the spread – so these are the pests we should be focussing our efforts on.”

The discovery of crop pests and pathogens in new areas has accelerated in recent years, driven primarily by global trade, but also potentially by climate change.

Targeting areas where new pests are probably present – or are highly likely to arrive – could be a key aspect of tackling their spread and reducing the resulting crop damage.

“Prior studies have often assumed that unreported pests in a global distribution database represent a true absence,” Dr Bebber said.

“Our analysis provides a method for quantifying these ‘pseudo-absences’ to enable improved distribution modelling and risk analysis.”

The research was partly funded by the British Society for Plant Pathology.

The paper, published in the journal Global Change Biology, is entitled: “Many unreported crop pests and pathogens are probably already present.”