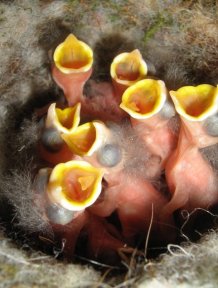 The researchers found that individual birds can adjust their laying date to match the optimal date. Pictured: great tit chicks

Many birds are able to change their egg-laying date to cope with variable conditions, new research shows.

The study examined birds and mammals, and found birds in particular showed the ability to find the "optimum" laying date.

However, the research team – led by the University of Montpellier – say this ability may not be able to keep pace with the current rate of climate change.

"The environment is constantly changing, creating variation in natural selection acting on populations," said Dr Simon Evans, of the universities of Exeter and Oxford.

"For example, laying eggs earlier in the spring than others might be advantageous for a bird in one year but disadvantageous in another.

"Each year therefore has its own optimal timing for reproduction, with lower reproductive success for individuals breeding earlier or later than this.

"As a result, individuals reproducing at the optimum time contribute more surviving offspring to the next generation than those breeding too early or too late.

"Annual variation in natural selection has been very difficult to measure, particularly because each species has its own unique reproductive behaviours, making it difficult to compare studies from around the world."

To remedy this, the study combined records from 39 long-term projects that have each monitored the reproductive timing in their bird or mammal population for several decades, to allow general conclusions to be reached.

The results show that the optimal timing of reproduction varies between years in most populations.

The study also looked at individuals reproducing over two consecutive years, to assess how well they adjust their reproduction date from one year to the next to match changes in climate, a phenomenon called "phenotypic plasticity".

They found individual birds can adjust their laying date to match the optimal date.

However, breeding dates generally occur later than the optimum, so there are fewer offspring produced in these populations than there could be, if they were able to advance the timing of reproduction as fast as the climate is changing.

The paper, published in the journal Proceedings of the National Academy of Sciences, is entitled: "Fluctuating optimum and temporally variable selection on breeding date in birds and mammals.