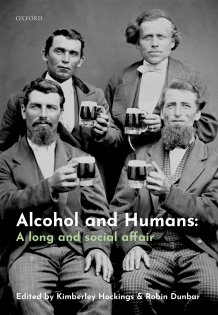 The book – ~Alcohol And Humans: A Long And Social Affair" – looks at the history of our relationship with alcohol, from our evolutionary past to the present.

Alcohol tolerance may have saved our ancestors from extinction

The ability to process alcohol may have saved humanity’s ancestors from extinction, a new book suggests.

About ten million years ago, our African ape ancestors were eating fallen fruits on the forest floor – many of which would have begun to ferment and become alcoholic.

At the time, ape populations were crashing in the face of competition with monkey species which were able to eat unripe fruit – which apes, like humans, struggle to digest.

What seems to have saved at least one line of apes, the book says, was a genetic adaptation that allowed them to process alcohol, meaning they could begin eating overripe fruits.

Monkeys are unable to tolerate the ethanol in such fruits, and this new source of calories might have brought apes back from the brink.

The book – “Alcohol and Humans: A Long And Social Affair” – looks at the history of our relationship with alcohol, from our evolutionary past to the present.

“Even today we see great apes eating fermented fruit and even drinking palm wine produced by humans,” said co-author Dr Kim Hockings, of Centre for Ecology and Conservation on the University of Exeter’s Penryn Campus in Cornwall.

“It’s hard to be certain of why they do this, and this reflects the complex history of our own relationship with alcohol.

“One interesting point is that the alcohol level in fallen fruit is usually about 1-4% – something like weak beer – yet much of the alcohol consumed by humans today is far stronger than this.

“As with other substances like salt and sugar, the problem may not be the substance itself but the concentrations we now have access to.”

The book says alcohol is often viewed only as a “social problem” or as a means to get drunk – but this overlooks its importance in the social fabric of many human societies both past and present.

"Alcohol has played an important role in how humans have used feasting to create and maintain their relationships," said Robin Dunbar, Professor of Evolutionary Psychology at the University of Oxford.

“Across cultures and in different time periods, it has consistently been a major part of the way humans socialise with each other.

“Increasingly, alcohol is viewed as a medical issue, but alcohol abuse is only a small part of a much wider social pattern of alcohol use by humans.”

Many other species are known to consume and process alcohol, and the researchers’ next goal is to test ethanol levels in wild fruits.

The book, co-authored and co-edited by Dr Hockings and Professor Dunbar, draws on expertise from fields including anthropology, archaeology, history, psychology and biology.

It is released today (Thursday) in the UK, and on January 5 in the US. To buy a copy, visit the Oxford University Press website.