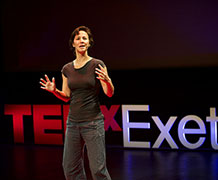 The inventors of the term “glass cliff” – which appears on the shortlist for the Oxford Dictionaries word of the year 2016 – say it has found fame because it resonates for so many women.

It is used to describe a situation where a woman ascends to a leadership position in which the risk of failure is high – a glass cliff from which she might fall.

The research that led to the term came about after a 2003 Times article which stated: “The triumphant march of women into the country’s boardrooms has… wreaked havoc on company performance.”

The academics felt the conclusion was unwarranted, and set about testing it.

Professor Ryan said: “We found that the appointment of women did indeed coincide with poor company performance – but this poor performance was in train before they arrived.

“In short, women were being appointed in difficult circumstances and when businesses were failing – and there was no evidence of a similar pattern for men.”

Previous research on the “glass ceiling” had focussed on the quantity of top jobs filled by women, but this research showed the quality of those jobs was also an issue.

When deciding on a name for the phenomenon, the researchers wanted to use the word glass as a way to refer to a problem which was real but invisible.

“It was in the context of these discussions — of which there were a huge number — that we came up with, and settled upon, the epithet by which the tendency to appoint women to precarious (or simply suboptimal) leadership positions has come to be known: the glass cliff,” said Professor Haslam.

“From the moment we started to tag our research in this way it was clear that people understood what we were talking about.

“It resonated with a great many women – not only in business, but in politics, in education, in policing, in law; indeed, pretty much everywhere that leadership positions are on offer.”

The term glass cliff continues to resonate, partly because of the number of women promoted to prominent but precarious positions of leadership since the original research.

This was particularly true in the wake of the crises triggered by the 2007-8 financial meltdown when women such as Mary Barra, Marissa Mayer, Johanna Sigurdardottir, Ellen Pao, Jill Abramson, Janet Yellen, Theresa May and Hillary Clinton came to the fore.