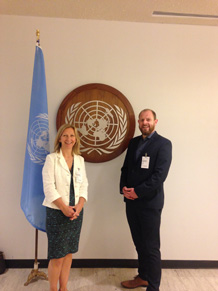 However Professor Tamara Galloway, from the University of Exeter, insists further urgent research is needed to fully discover the short and long-term threat they pose to global human health once they enter the food chain.

The review, to be conducted by the Department of Health, is in response to an Environment Audit Committee inquiry held earlier this year – where Professor Galloway was one of a select group of world-leading experts called to give evidence - which called for plastic microbeads to be banned for use in cosmetics.

It comes as the Government has also highlighted conclusions from new research funded by Defra – co-authored by Professor Galloway – that shows that microplastics can transfer along a simple food chain from a mussel to a crab, amongst other findings.

Commenting on the announcement, Professor Galloway said: “We find tiny pieces of plastics and synthetic fibres in every sample of seawater we study from around the world. We also find them in marine animals including mussels and crabs. Despite this, we know nothing of the risks they pose to human health.”

“Based on current estimates, the level of human exposure is likely to be low, averaging a few thousand particles a year, but most people would probably prefer not to be eating plastic with their seafood. There is an urgent need for more research into the impact on human health of microplastics, as well as their impact on the environment.”

Professor Galloway, who specialises in ecotoxicology, is recognised as one of the world’s leading authorities on microbead and marine pollution.

In June, she delivered a high level presentation at the United Nations headquarters, in New York, at the Open-ended Consultative Process on Oceans and the Law of the Sea (ICP-17) session on Marine Debris, Plastics and Microplastics.