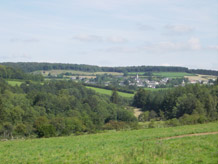 If people continue using and changing the land over the next century in the same way they currently do, soils will have limited potential to counter the effect of climate change and will become a net source of atmospheric carbon dioxide, experts have warned.

Experts have forecast that a quarter of the carbon found in soil in France could be lost to the atmosphere during the next 100 years. This could lead to soil becoming a net source of carbon dioxide to the atmosphere. At present soil is considered to absorb carbon dioxide and this partially counters the impact of man-made climate change.

The pace and nature of predicted changes in climate over the next century will make the soil less able to store carbon, while business-as-usual land use change has limited capacity to counteract this trend, experts from the University of Exeter, INRA and CERFACS in France and University of Leuven in Belgium say in the journal Scientific Reports.

If, as predicted, soils lose a significant amount of their carbon this will endanger their ability to produce food and store water and this could lead to increased soil erosion and flood damage.

Researchers made these predictions for the 21st century by combining models of soil carbon and land use change with climate change predictions, using France as a case study. The study shows that land under almost all uses will be subject to dramatic losses of soil carbon by 2100. Only conversions of land into grass or forest result in limited additional storage of carbon in soils. Unfortunately these land changes are not likely to happen on a large scale because of the pressures on land resources imposed by urban expansion and food production.

Lead author Dr Jeroen Meersmans, from the University of Exeter, said: “A reduction in anthropogenic CO2 levels is crucial to prevent further loss of carbon from our soils. However, promotion of land use changes and management that contribute to soil carbon sequestration remains essential in an integrated strategy to protect soil functions and mitigate climate change.”

Co-author Dr Dominique Arrouays of the French National Institute for Agricultural Research added, “Purposive, targeted land use and agricultural practice changes would be needed if climate change mitigation is to be maximized. Therefore, the efforts to enhance carbon sequestration in soils, as proposed by France during the COP21, should be promoted immediately.”

The research is funded by the European Commission through the Marie Curie Intra-European Fellowship for Career Development (IEF) project D3DC.