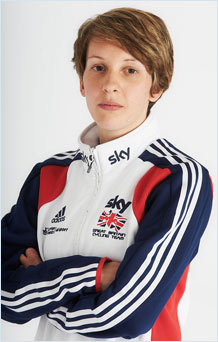 Eight years ago Crystal Lane spent endless hours at the University of Exeter training to become one of the world’s best Paralympic cyclists.

Now, as she returns to the UK from Brazil, the coaches who helped Crystal develop the strength and stamina she needs to win are celebrating her silver medal in the C5 3,000m individual pursuit final, bronze in the road race and fourth place in the C5 time-trial in Rio.

Crystal started cycling aged 24 after seeing a Talent Identification programme looking for talented athletes to compete at London 2012. She was born with the fingers on her left hand underdeveloped so that obviously had some impact on her ability to brake & change gears when she took up cycling, however through British Cycling and other resources changes were made to her bike set up allowing her to have full controls on one side of her handlebar set.

She came to the University of Exeter as a mature student and studied Sports Science at St Lukes and is now studying for an MA in Sports Nutrition at Loughborough University.

Alan Pope, Crystal’s Strength and Conditioning Coach at the University of Exeter, helped her develop her all-round fitness and cycling specific strength that cycling demands. The University’s Tennis Manager, Charlotte Wallace, was also involved in Crystals support team at the University and acted as a lifestyle mentor during her degree.

“While she was here Crystal trialled for a multitude of track events as well as taking part in time trials and road races,” Alan said. “The bulk of her training was focused on developing greater leg strength in order to increase her power output and through specialist equipment we have at the University we were able to help her gain those added watts needed to take her cycling to the next level. We also experimented with different straps for her wrist to see what worked, it was very much trial and error in the early days but through contacts within the English Institute of Sport we were able to get advice and how to optimize her training.

“We are all so delighted for Crystal. She deserves the success in Rio 2016 because she was so dedicated and put in so much hard work. Seeing Crystal ride against her hero (Dame Sarah Storey) was awesome and to be classed as next best C5 Pursuit rider in the world after the most successful Paralympic cyclist in history is something to be very proud of”

Upon graduating from Exeter Crystal presented a signed British Cycling jersey to the High Performance Programme as a thank you for their support in the build up to London 2012 and sits proudly in the Sports Park alongside a National Champions jersey she had previously donated.