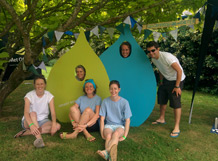 The researchers' stall explored 'the voyage of a water droplet'

Revellers at Green Man Festival explored the importance of water and land use management by using a range of games and information boards.

Approximately 700 festival goers of all different ages visited a group of Exeter researchers over the four day event. Their hugely popular stall explored ‘the voyage of a water droplet’ through a catchment in order to illustrate the way we manage water passing through the landscape.

The way that water and land is managed has major environmental, social and economic implications and there is a need for long-term solutions to help with issues such as flooding and water quality. Through fun interactive activities, the researchers demonstrated this need and explained the science behind these issues. The highlight of the stall was a game that used a golf ball to represent a water droplet; participants had to make choices as to which land uses would get the water droplet down from the uplands to the main river the slowest, thereby illustrating the benefit of certain types of interventions to reduce flooding.

Dr Alan Puttock said: “We were completely overwhelmed by the positive response our stand received. It was inspiring to see both adults and children really engaging with the water and land use issues our research deals with.”

Dr Emilie Grand Clement said: “Our stall at the Green Man Festival was extremely popular and we received some amazing feedback.  Some children even returned each day to play our game, saying we were their favourite part of the festival!”

Morag Angus (Exmoor Mires Partnership Manager) said: “This was a completely novel way to get children and adults thinking about water and peatlands, how human activity has changed them and what simple things we can do to restore them. The next generation were totally engaged with it all.”

The Green Man Festival, which ran from 18 to 21 August, is an independent music and arts festival held annually in the Brecon Beacons in Wales. The researchers’ Voyage of the Water Droplet stand could be found in Einstein’s Garden, an area of the festival dedicated to science and nature.