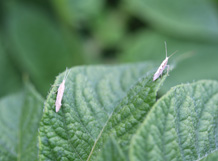 Millions of moths that destroy vegetable crops have been spotted in Cornwall by a University of Exeter expert.

The diamondback moth is a major global pest, eating cabbages, cauliflowers, broccoli, oil seed rape and sprouts, among other vegetables. It causes more than $4 billion of losses for farmers each year around the world. A new outbreak could be the biggest in the UK since 1958.

Dr Ben Raymond, Associate Professor of Entomology at the University’s Centre for Ecology and Conservation in Penryn, Cornwall, has spotted millions of diamondback moths in the county. He and other experts are warning there will be a major outbreak across the UK this summer.

The diamondback is a small micro-moth that is a highly damaging pest of Brassica crops. It has caused problems for farmers previously, but in the past two weeks very large numbers have been turning up in moth traps.

Dr Raymond said: “during a very rough survey of 5km of the coastline between Falmouth and the Helford River I found enough diamondbacks to suggest there were 20 to 40 million just in this local patch.

“The numbers across the UK suggest a major outbreak of this species, with numbers in the 100s of millions if not more, probably the biggest since 1958.

“Previous outbreaks have been sourced back to the other side of the Baltic - a 2,000km migration route- which is pretty impressive for a tiny moth. Reports from other observers via social media suggest the moths are coming from the east, as there are high numbers in the Netherlands and in Finland.”

These moths are a major pest, despite their small size, mostly because of their ability to reproduce quickly and lay plenty of eggs. The average female can lay up to 200 and an average generation lasts a month, or even two weeks in the tropics.

This means diamondbacks are able to evolve to be resistant to insecticides very quickly – it has taken just two years for them to develop resistance to some new chemicals.

Dr Raymond said: “hopefully the migrant population in the UK will be treatable and will not have a severe impact on food production of these crops.”