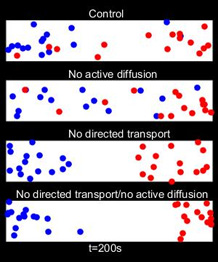 Researchers have found novel insight into the ways cells organise themselves.

How to organise a cell: novel insight from a fungus

University of Exeter researchers have found novel insight into the ways cells organise themselves.

Their work, funded by the Biotechnology and Biological Sciences Research Council (BBSRC) and published this week in Nature Communications, uses an interdisciplinary approach to show, for the first time, that random distribution of organelles is a consequence of energy-dependent activity in a fungus and mammalian cell line. Organelles are the functional units of a cell. Like “organs” in a body, they perform specialised functions that allow survival of the cell.

The energy spent to distribute them is provided by ATP, a general “fuel” for molecular motors, which transports its “cargo” along the fibres of the cytoskeleton. The authors show that, like lorries on a highway, the motors move a specific commodity. This “directed transport” drags other organelles, but also creates turbulence that increases random motion of the organelles. Both mechanisms are required to mix the cell contents and ensure interaction between organelles. This is essential for cell survival. This study was undertaken by an interdisciplinary team of researchers led by Professor Gero Steinberg (Biosciences) and his team, in collaboration with Dr Congping Lin and Professor Peter Ashwin (Mathematics).

Lead author Professor Gero Steinberg, Chair in Cell Biology and Director of the Bioimaging Centre at the University of Exeter, said: “Many people had previously assumed that organelles are randomly-distributed, as that’s how they appear. Our research has revealed a new fundamental principle of the way cells organise themselves – that they use energy to create this seemingly random, even distribution. This allows the organelles to interact with each other throughout the cell. Interestingly, organelle clustering is found in some human disorders, such as Zellweger syndrome. Thus, understanding the mechanism of distributing organelles may have wider implications for medical research.”

Professor Nick Talbot, Deputy Vice-Chancellor (Research and Impact) at the University of Exeter, said the research was an excellent example of disciplines working together to advance knowledge. He said: “This is a beautiful piece of work which represents some of the finest live cell imaging being done anywhere in the world, coupled with mathematical modelling and molecular genetics. The study also exemplifies the research approach of looking at living cells as integrated biological systems in the way that we aim to achieve in our new Living Systems Institute, opening in September, which will bring together scientists from a range of disciplines to pioneer new approaches to understanding disease.”