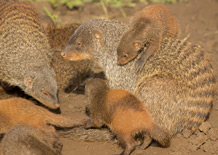 Mammals can protect their unborn young from harmful chemicals in their blood even at the expense of their own survival odds, a study into mongooses conducted by researchers at the University of Exeter suggests.

Chemicals causing oxidative stress are a normal metabolic by-product in all animals but can cause oxidative damage to tissues and cells, leading to aging. Current theory predicts that females should show higher levels of such oxidative damage when they are pregnant.

This five-year study into banded mongooses carried out by Dr Emma Vitikainen and colleagues at the Centre for Ecology and Conservation at the University of Exeter’s Penryn Campus found the opposite pattern. Mothers with the lowest levels of oxidative damage when pregnant also had the greatest number of surviving offspring.

The research showed oxidative damage to be strongly linked to adult survival in both sexes. Unusually male banded mongooses live longer than females, and they also had lower levels of oxidative damage across their lives. While females reduced their amount of damage during pregnancy, the level of damage bounced back after breeding.

Dr Vitikainen, lead author of the study said: “We previously suggested that oxidative damage might be harmful for unborn offspring, as well as mothers themselves. Our current results support this hypothesis, and provide evidence that pregnant females dial down their level of damage to shield their unborn young from harm during sensitive developmental windows even if they bear a cost at other times.”

The researchers studied a population of 251 animals over 5 years at Uganda’s Queen Elizabeth National Park and used mathematical modelling to investigate how oxidative shielding of offspring can evolve. They measured levels of malondialdehyde, a marker of oxidative damage to lipids, in the circulation of mothers before, during and after they were pregnant. They then assessed whether levels explained variation in the number of offspring that survived to emerge from the underground den where they are born.

Dr Jon Blount, a senior researcher on the study, said: “These results suggest we may need to rethink current theory about why animals deteriorate with age, and how parents can influence the development of their offspring.”

More information about the Banded Mongoose Research Project can be found on the Social Animal Research website.