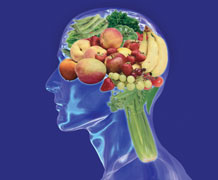 The MooDFOOD study is recruiting 250 overweight people in and around Exeter.

If you are prone to the January blues after an over-indulgent festive season, you could help researchers at the University of Exeter discover whether healthy eating can ward off depression.

Scientists have long known that depression is often linked to weight issues and poor diet – but there is a lack of evidence on whether a bad diet can actually cause depression or itself results from depression, and whether switching to healthier foods could help to keep low mood at bay.

The MooDFOOD study is recruiting 250 overweight people in and around Exeter and aims to provide the most robust evidence yet on whether eating more healthily and using nutritional supplements can prevent vulnerable people from becoming clinically depressed.

The MooDFOOD trial will compare different nutritional and lifestyle strategies that might change mood and wellbeing in people with a higher than average body mass index (BMI).

“Clinical services report that referrals for depression shoot up in January and February,” said Professor Ed Watkins from the University of Exeter’s Mood Disorders Centre. “We are hoping that when people start to feel low in mood they will come and volunteer for the study, which will give them an opportunity to develop healthier and happier lifestyles.”

Research suggests that specific nutrients found in the diet or used as a supplement, such as Omega-3 fatty acids from fish oil, could help improve mood by supporting and protecting the brain. To test this, supplements will be compared to inactive placebo supplements that are identical in look and taste but include no active ingredients.

The European commission funded study, which involves 1,000 participants across four countries – Spain, Germany, the Netherlands, and the UK - will also investigate whether changes to lifestyle and behavioural coaching can help to improve mood. This will focus on changing behaviour to build up healthy habits and reduce unhealthy habits, especially around food, diet, and activity.

“There is growing evidence of an association between being overweight and experiencing depression, as well as between unhealthy eating and depression - but there isn’t yet much data to test if diet plays a part in causing or preventing depression,” added Professor Watkins. “It is hoped that this trial will revolutionize our understanding and prevention of depression – a condition that affects nearly one-fifth of adults in the UK.”

Participants must be willing to tell their GP that they are taking part. They must not currently be receiving treatment for psychiatric disorders, must not be pregnant and must never have had weight loss surgery.

If you are interested in participating in this study and helping researchers to find out more about the link between diet and depression you can complete an assessment at the following link: http://moodfood-vu.eu/

The team is also recruiting for a trial on Cognitive Behavioural Therapy (CBT) for depression. To find out more or to get involved, click here.