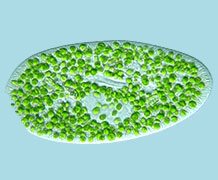 Scientists have been debating for decades whether symbioses, like the Paramecium-Chlorella association, are based on mutual benefit or exploitation.

A far from perfect host

Biologists at the universities of Exeter and York have published new research which shows that an ancient symbiosis is founded entirely on exploitation, not mutual benefit.

The researchers concluded that a single-celled protozoa called Paramecium bursaria benefits from exploiting a green algae which lives inside it, providing its host with sugar and oxygen from photosynthesis.

Scientists have been debating for decades whether symbioses, like the Paramecium-Chlorella association, are based on mutual benefit or exploitation.

The common belief among academics was that both the protozoa and algae benefit.

Dr Chris Lowe, lecturer in Evolutionary Ecology at the University of Exeter and lead researcher on the paper, said: “This research suggests that what we have always thought of as mutualism – where species gain mutual benefit from interacting with each other – might actually be based on exploitation where one species gains by capturing and then taking resources from another.”

The new research builds on work carried out 20 years ago at the University of York by Professor Richard Law.

Professor Mike Brockhurst, from the Department of Biology, said: “Richard Law came up with exploitation theory in the 1990s and his mathematics has shown to be correct.

“This new research has turned the assumption that symbiosis is mutually beneficial on its head.”

Professor Brockhurst said the team, which also included researchers from the University of Sheffield, tested the symbiotic relationship of the protozoa and algae across gradients of different light intensity.

“We found that for the host the benefits of being in symbiosis increased with light. Although symbiosis is very costly in the dark for the hosts, because the algae are useless, when you increase the light intensity then it becomes very beneficial to have algae because they give you lots of sugar.

“Across all of the environments that we tested we never found any conditions where both species benefited. For the algae it is always costly to be in symbiosis.”

Professor Brockhurst said the research, which was funded by the Natural Environment Research Council (NERC) and published in Current Biology, suggests there is likely to be an exploitative component in other symbiotic relationships.

“The big one is corals, where climate change related bleaching results from loss of photosynthetic microbial symbionts,” he added.

“I suspect in a lot of cases where we assume mutualism we might find that isn’t the case, which has important implications for understanding and conserving symbioses in nature.

“Because symbioses are so common, understanding how symbiotic species interact and how they evolve will tell us a lot about ecosystems and how they will respond to climate change.”