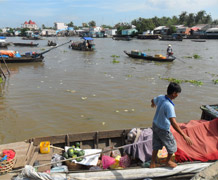 The Mekong Delta in Vietnam. Image courtesy of Milei Vencel

A change in the patterns of tropical storms is threatening the future of the Mekong River delta in Vietnam, indicating a similar risk to other deltas around the world, new research shows.

The study, funded by the UK Natural Environment Research Council (NERC) and undertaken by the University of Southampton in collaboration with the universities of Exeter, Hull, Illinois (USA) and Aalto (Finland), found that changes in the behaviour of cyclones mean less sediment is running into rivers upstream of the Mekong delta, starving it of material vital for guarding against flooding. The findings are published in the journal Nature.

Deltas are landforms made from sediment washed into rivers and carried downstream. The sediment builds up where the river meets slow-moving or still water, such as seas or lakes. Deltas naturally subside under their own weight, so a constant flow of new deposits is vital to offset these changes and prevent flooding which could be disastrous to agriculture and the environment.

Lead researcher Professor Stephen Darby, of the University of Southampton, said: “Our study is the first to show the significant role tropical storms play in delivering sediment to large river deltas. We show that although human impacts affect the amount of sediment in a river, cyclonic activity is also a very important contributing factor.”

Co-author Professor Rolf Aalto, of the University of Exeter, said the paper’s findings raise new questions about how sediment sourced from tropical cyclones affects the sustainability of river deltas – which are home to half a billion people around the world.

“My colleague Professor Andrew Nicholas and I are investigating how the Mekong lowlands respond to exceptional flood events” he said. “It is essential to understand where and how the sediment derived in these extreme storms sustains the floodplains, and determining these mechanisms is the focus of field research and river modelling at Exeter.”

The Mekong is the world’s third largest river delta at 39,000 square kilometres. It is home to 20 million people and has a large agricultural area which is dominated by rice and is vital to the economy of Vietnam.

The international team behind this latest research developed a new method of analysing archived measurements of water discharge into the Mekong River to detect sediment concentration dating back over two decades (1981-2005).

Then, by modelling the water flows through the Mekong’s channels, they were able to isolate the impact of changes in tropical storms on the river’s sediment load. Their data shows that of all the sediment transported to the delta, one third is due to tropical cyclones. It also shows that the Mekong’s sediment load has declined markedly in recent years – largely due to changes in the location and intensity of storms tracking across the upstream rivers that feed the delta.

Professor Darby commented: “These results are very significant because the Mekong’s sediment load is already declining as a result of upstream damming and other human impacts such as sand mining. Understanding the role played by changes in tropical cyclone climatology gives us a broader knowledge of the threats facing this delta and others like it around the world.”

The research has implications globally because other major rivers such as the Ganges (India/Bangladesh), Yangtze (China) and Mississippi (USA) have catchments that are regularly struck by tropical storms. Some 500 million people live and work in the world’s major river deltas. This study indicates that changes in storm climatology, even in the river catchments far upstream of the deltas themselves, must also be considered when evaluating their future vulnerability to sea-level rise.