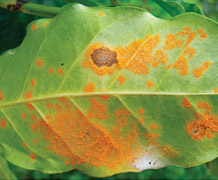 Fears that climate change is promoting a fungal disease which can devastate coffee crops may be unfounded, research by the University of Exeter suggests.

Media reports have linked coffee leaf rust – also known as CLR or roya – with climate change, but the new research finds “no evidence” for this.

Researchers tested the hypothesis that “the weather was responsible for a recent outbreak of CLR in Colombia and that climate change increased the probability of weather conditions favourable to CLR”.

The paper, published in Royal Society journal Philosophical Transactions B, concluded: “We find no evidence for an overall trend in disease risk in coffee-growing regions of Colombia from 1990 to 2015, therefore, while weather conditions were more conducive to disease outbreaks from 2008 to 2011, we reject the climate change hypothesis.”

Colombian coffee production fell by about 40% from 2008-11, and this decline has been linked to a severe CLR outbreak across Colombia and neighbouring countries.

Dr Dan Bebber, lead author of the University of Exeter study, said there was a “perfect storm” of factors favourable for CLR at that time, including weather conditions and a decrease in fertiliser use due to price rises during the 2008 financial crisis.

“Farmers weren’t treating coffee bushes as they normally would, and this was probably one of the factors that led to the rise in CLR,” he said.

“The climate at the time was conducive to CLR but there had been earlier periods of similar conditions when there wasn’t an outbreak.”

Dr Bebber and co-authors Sarah Gurr and Angela Delgado Castillo (a student on Exeter’s MSc in Food Security at the time of the research) found that Colombian coffee yields had been highly variable over time due to varying weather, the effects of disease, management and socio-economic factors.

Dr Bebber said more research was needed to fully understand the causes of the 2008-11 CLR outbreak, which caused hundreds of thousands of people to lose their jobs in coffee farms in Central America.

Temperature and leaf wetness are the most important determinants of infection risk for fungal plant diseases including CLR, which does not usually kill coffee bushes but can dramatically reduce the crop they produce.

The study was supported by University of Exeter alumnus Gerry Brown and his wife Clemencia Brown.