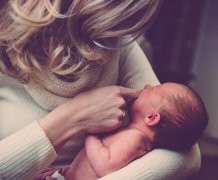 Mothers who have repetitive and self-focused negative thoughts about their own problems can have poorer-quality relationships with their babies, new research from the University of Exeter shows.

Although it is completely normal for mums with young babies to worry about practical, personal or parenting problems on a daily basis, the study found that when negative thoughts about the self and personal problems become all-encompassing and overwhelming (e.g. Why don’t I feel happy?, Why can’t I cope as well as other Mums?), mothers become less sensitive and responsive to their young children compared to mothers who are not preoccupied in this way.

The study expected to find that the effects of rumination, or dwelling and becoming over-preoccupied with personal thoughts and problems, would be worse when mothers also had symptoms of depression. Surprisingly the researchers found that it didn’t matter if mothers were feeling low or not.

But their study suggested that rumination – broadly defined as having repetitive, prolonged, recurrent thoughts about one’s self concerns and one’s experiences - affects the interactions between a mother and baby, regardless of how low the mother might be feeling.

Previous research has shown that poorer early interactions with baby can have an impact on later cognitive and social functioning such as peer interaction and emotional well-being.

The University of Exeter researchers observed separately 79 mothers (39 with low mood and 40 in a control group) and babies aged 3 months to a year old, recruited through community health visitors, GP surgeries, mother and baby groups and children’s centres based in Devon and Torbay.

The researchers wanted to study whether rumination, ‘by virtue of its internal self-focused nature …would reduce sensitive maternal responding to the infant.”

Mothers were filmed either in their own home or at the University of Exeter in a quiet room with minimal noise disruption. Age-appropriate toys, a blanket, a bouncer and a high chair were supplied. Mothers were asked to play normally with their infant as if they were at home without the cameras.

Maternal sensitivity was affected in a number of ways, and in different ways for different mums. The researchers examined, among other things, the mothers’ facial expression, body language, speech and choice of activity with their baby. Some ‘ruminating’ mothers had less eye contact with their baby and did not comfort the infant if they became distressed, some also chose an activity that was not appropriate for the infant’s age, or spoke to their child in a flat or quieter tone.

Researcher Dr Michelle Tester-Jones said: “We hope these findings will be useful for health visitors and midwives when working with new mums, to help understand why mums might be finding interactions with their baby more difficult and support them in building a close and responsive relationship with their baby. We understand that being a new parent can be difficult, and we think that mums are doing a great job. We also know that it’s important to give mums a helping hand, and that mums are often looking for strategies to help them be the best mum they can be. The purpose of our study was to help identify thinking styles that might contribute to more or less sensitive parenting. The good news is that there are strategies to help manage rumination, and our research suggests that changing rumination can reduce potentially negative interactions with baby.”

Previous research on worry and rumination by Professor Ed Watkins and other psychologists has shown that when repetitively thinking about problems or difficulties, it is much more helpful to focus on the problem in a specific and focussed way, such as when, where and how it happened and how you can fix it (e.g., “How can I begin to address this?”), rather than on the more general meanings and consequences of the problem (e.g., “Why does this keep happening to me? What is wrong with me?”). This more specific, focussed way of thinking can improve problem-solving, help to keep difficulties in perspective, and improve mood.

Dr. Heather O’Mahen said: “We know that mums are often getting by on a small amount of sleep. It can feel tricky for mums to try to stick to a focused approach when they’re so tired. It can be especially important at this time for mums to talk through their worries in this specific and focussed way with other people she trusts. We also urge mothers not to be too hard on themselves. No mother is perfect. We know from other research by Dr. Anke Karl and colleagues that being gentle and kind to yourself can also counter the effects of rumination.”