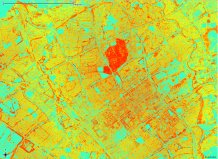 A ground-breaking technique which allows green spaces to be mapped in 3D from an aircraft could boost biodiversity, aid human wellbeing and even help protect rainforests.

Using an airborne laser scanning technique and a new image processing approach, scientists from the University of Exeter have been able to create detailed 3D maps that reveal the complex structures of vegetation from the tops of trees down to the ground.

Other techniques for mapping vegetation from the air have previously been able only to map the top of the canopy at high resolution or else estimate understorey (shrubs beneath the trees) at much coarser resolution – missing details such as woodland paths, areas eaten by deer and shrubberies in urban areas.

The new approach developed by Exeter academics uses a system called waveform lidar – and produces 3D images in far more detail than existing techniques, allowing vegetation to be mapped over large areas from above at high enough resolution to pick out small details beneath trees.

Dr Karen Anderson, who led the research, explained how other methods for mapping green space can be biased because the hidden understorey is neglected.

“Vegetation canopies are very complex three-dimensional structures, and for the first time we can now measure what lies underneath the canopy over a very large area,” she said.

“This has great potential to be used for a range of purposes, from promoting biodiversity in urban areas to mapping easy walking routes and monitoring the health of habitats from cities to rainforests.”

Previous research has shown how green spaces boost human wellbeing, and the researchers hope that this data – gathered by aircraft over Luton, Bedford and Milton Keynes – can be used to improve understanding of biodiversity and the impacts it has on people living in towns and cities.

“Amongst other things, this approach allows us to understand how these urban green spaces are connected and we can then explore them in three dimensions, for example, from a bird’s point of view,” said Dr Anderson, of the Environment and Sustainability Institute on the University of Exeter’s Penryn Campus.

“For example, the data might show us how we can manage the vegetation in certain places such that it could have a disproportionate effect on improving the environment.”

“It also allows us to understand the impact of private gardens on urban biodiversity. Without this, it is almost impossible to gather data on what’s in large numbers of people’s gardens – and we know gardens have complex structures and perform a vital function in urban environments.”

The 3D structure of vegetation affects ecological function and processes, providing an indicator of habitat and biomass, and impacting on weather and climate.

A similar sensor to the one used by the Exeter team, named Global Ecosystem Dynamics Investigation (GEDI), is due to be added to the International Space Station in early 2019.

Dr Steven Hancock, the paper’s lead author, coded the algorithms and worked on the project at the University of Exeter before moving to his current job working for the University of Maryland on the NASA GEDI project.

“The computer programmes developed for this study are freely available and are being applied to NASA data as part of the calibration and testing of the GEDI instrument”, Dr Hancock said.

After carrying out much of their research in the skies over Bedfordshire and ground testing with Dr Daniel Cox and University College London’s Dr Mathias Disney and his ground-based laser, the academics thanked one local woman in the acknowledgements section of their paper.

“Thank you to Mrs Guy of Luton for access to her garden and for providing cups of tea to the field team,” they wrote.

The research, funded by the Natural Environment Research Council (NERC), is published in the journal Remote Sensing of Environment.