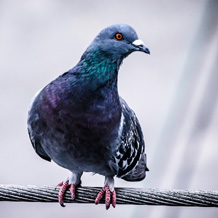 Humans could become better at switching between tasks if they behaved more like pigeons.

Humans could learn something from pigeons to improve their efficiency

Humans could become better at switching between tasks – such as shifting from emailing to taking a phone call – if they behaved more like pigeons and stopped thinking about what they are doing, research by psychologists at the University of Exeter suggests.

In an experiment that compared humans' ability to switch between tasks with that of pigeons, the researchers found that while the birds' way of learning to do tasks associatively caused no decrease in accuracy, humans incurred costs, in that they were slower and made more mistakes when they stopped doing one thing and started doing another.

The work of PhD student Christina Meier and Professors Stephen Lea and Ian McLaren, which was published in the Journal of Experimental Psychology: Animal Learning and Cognition, has been highlighted in the American Psychological Association’s series of ‘Particularly Exciting Experiments in Psychology’ (known as “PeePs") this week (June 9).

A large body of research has shown that people are faster and more accurate when they repeat the same task than when they switch between tasks. This experiment showed that pigeons who learnt a task associatively by means of Pavlovian conditioning were able to switch between tasks without slowing down or making more errors.

Lead author Christina Meier said: “We looked at why humans make more errors when they move between two different tasks whereas pigeons don’t. Pigeons don’t analyse what they see. If they experienced a given situation before, the pigeons will repeat the behaviour that had the best outcome for them in those previous encounters. Humans don’t do this, we use rules. We make things complicated.”

Professor McLaren said: “We are not saying that pigeons are super clever. What this research shows is that we can teach pigeons to swap between tasks at no cost to their efficiency, and that they appear to be doing it without what psychologists call “executive control”. We suspect humans have access to this associative solution to the problem too and this has educational implications, skills implications and implications for our understanding of human behaviour.”