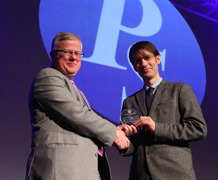 Frederick Verbruggen accepting award from Robert Logie, Chair of the Governing Board of the Psychonomic Society.

A University of Exeter psychologist has been given three prestigious prizes for his work to further understanding of how the human mind regulates behaviour.

Frederick Verbruggen has won the awards because of his significant contribution to the study of ‘executive control’ over the past decade.

This is a set of regulatory processes that aim to override unwanted, strong impulses or urges, allowing people to resist short-term temptations and fulfil long-term goals.

Executive control is critical in everyday life but remains poorly understood. Professor Verbruggen’s research aims to provide a more detailed account of how humans can regulate their behaviour.

This work may contribute to the development of new and better behavioural treatments for substance abuse disorders or problem gambling, and help people change behaviour such as overeating.

Professor Verbruggen received his PhD from Ghent University in 2005 and then worked at Vanderbilt University and Cardiff University as a Research Fellow. He was appointed Senior Lecturer at the University of Exeter in 2010, and Full Professor in 2012. His work has been published in the best scientific journals in the field and has been funded by the Flemish Government, ESRC, BBSRC, British Academy, Wellcome Trust and European Research Council.

The prizes, from the Experimental Psychology Society, the Psychonomic Society and Vanderbilt University, were awarded by panels of world-leading experts.

Professor Verbruggen said: “It means an awful lot to win these prizes because they have been awarded by my peers and colleagues, and I’m incredibly proud they chose me as the recipient.”

In 2014 Professor Verbruggen, won the 2014 Randolph Blake early career award, given by Vanderbilt University. This award recognises exceptional alumni from the university who are at the early stages of their career.

Professor Mark Levine, Head of Psychology at the University of Exeter, said: “Frederick’s achievement is outstanding. These awards recognise Frederick’s exceptional contribution to the study of executive control.

“Frederick and his team are conducting ground breaking science that puts Exeter at the cutting edge of attempts to tackle big social problems like addiction and obesity. We are extremely proud to have such a world leading scientist in the Psychology department at Exeter.”