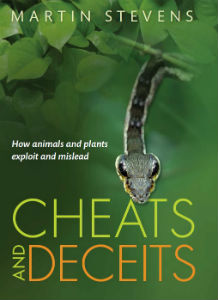 Cheats and Deceits: How Animals and Plants Exploit and Mislead, launches next week.

Deception and trickery are rife in natural world, scientist says in new book

A University of Exeter academic is the author of a new book that describes how animals and plants regularly use ingenuity and cunning to exploit and mislead one another in order to survive and reproduce.

In Cheats and Deceits: How Animals and Plants Exploit and Mislead, which launches next week, Dr Martin Stevens explains the science behind how species mimic other objects or organisms in the environment for protection, trick others into rearing their young, lure prey to their death, and deceive potential mates for reproduction.

The fully-illustrated book, the first on the subject of trickery and deception in nature for a general audience, explains how deception is common in the natural world and how being economical with the truth can mean the difference between life and death.

Dr Stevens, an Associate Professor of Sensory and Evolutionary Ecology in the Centre for Ecology and Conservation, University of Exeter, explains how the behaviours have evolved and the varied ways that early naturalists and modern-day science have sought to understand the evolution and basis of deception in nature.

The idea for the book was inspired by his own fascination for the subject as well as his research interests, which focus specifically on animal coloration and vision and include many studies on camouflage, mimicry, and cuckoos.

“The main reason, ultimately, that I wanted to write the book is that I think it’s a wonderful and exciting subject, rich in natural history, exploration, and scientific work. It’s amazing that the natural world has been studied for centuries by explorers and natural historians and yet we are still discovering remarkable cases of how animals, plants, and even fungi can deceive one another,” said Dr Stevens.

“Many cases of deception have been known for a long time, including the sophisticated resemblance some jumping spiders have to ants (for protection), and the way that common cuckoos trick foster parents into raising the cuckoo’s young. Yet some of the most remarkable examples of cheating in nature have only just been discovered, including an Amazonian bird whose chicks mimic a bright orange toxic caterpillar, and a fungus that glows green at night to lure insects used in reproduction.”

Dr Stevens is due to talk about his book and the subject of deception at a number of events across the country including the Hay Festival and the Royal Institution.

The release of Cheats and Deceits by Oxford University Press follows the publication of a textbook by the same author called Sensory Ecology, Behaviour, and Evolution from the same publishers in 2013.