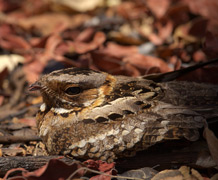 Camouflage really does reduce the chances of being eaten

A ground-breaking study has confirmed the long held assumption that camouflage protects animals from the clutches of predators, and offers insights into the most important aspects of camouflage.

The research, by scientists from the Universities of Exeter and Cambridge, investigated the camouflage of ground-nesting birds in Zambia, using sophisticated digital imaging to demonstrate how they would appear from the perspective of a predator.

The team found that animals or eggs that matched the pattern or contrast of the surrounding landscape were less likely to be eaten by their natural predators.

The study is published in leading journal Scientific Reports on Friday, January 29 2016.

Dr Jolyon Troscianko, lead author of the paper from the University of Exeter’s Centre for Ecology and Conservation department said: “We know that animal camouflage has evolved over millions of years to help prey evade being seen by predators – it is a classic example of natural selection.

“Yet although it may seem obvious that blending into your background makes you less likely to be seen, it is surprisingly difficult to test this in a natural setting.

“This is partly because very well camouflaged animals are of course difficult to find in the wild, and also because they tend to keep moving around, meaning the match between their own appearance and their background is constantly changing. In addition we had determine which predators were eating the nests so that we could take into account their different visual systems.”

Martin Stevens from Exeter University who, along with Claire Spottiswoode from the University of Cambridge, co-led the project said: “Despite such a long history of research, ours is the first study to directly show how the degree of camouflage an individual has, to the eyes of its predators, directly affects the likelihood of it being seen and eaten in the wild.”

The team studied a variety of ground-nesting birds, whose eggs would stay in a fixed location throughout the month-long period needed for incubation. This allowed the scientists to accurately compare both the adult birds, and their eggs, to their chosen backgrounds, as well as monitor which nests had been found by predators such as banded mongooses, birds, and vervet monkeys -– and even in one case hungry children.

The team also used specially-calibrated digital cameras and computer models of animal vision to view the nests as the predators might see them, from the sophisticated colour vision of birds – that can see ultraviolet wavelengths – to the relatively poor colour vision of mongooses that only see blues and yellows.

The research showed that in species that would flee the nest as predators approached, such as plovers and coursers, the eggs were more likely to survive to hatching if they matched the background more closely when exposed to view by their fleeing parent.

In nightjars, however, which conceal their eggs by remaining motionless over them when predators approached, it was the appearance of the adults that was most important for their survival: nightjars that matched the background pattern were more likely to save their eggs from being eaten.

“The astounding camouflage of plover eggs and nightjar plumage really underlines the skill of the fantastic team of local assistants who helped us with our research in Zambia by finding the hundreds of nests we studied” added Claire Spottiswoode.

The study was funded by the UK’s Biotechnology and Biological Sciences Research Council (BBSRC), a Royal Society Dorothy Hodgkin Fellowship, and the DST-NRF Centre of Excellence at the Percy FitzPatrick Institute.